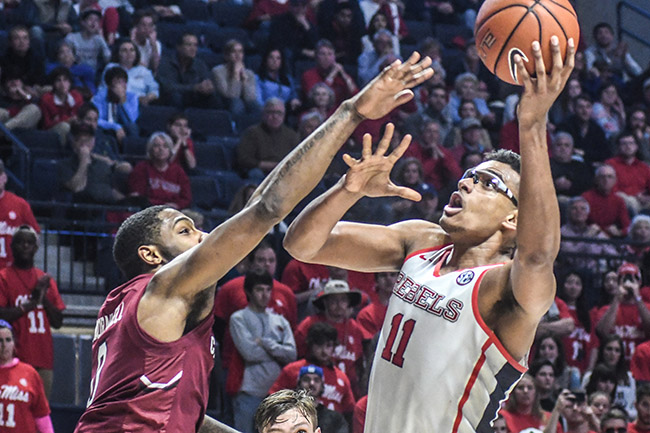 Sebastian Saiz is the latest Ole Miss player that can call himself Mississippi’s best.

Delta State’s Devin Schmidt and Mississippi State’s Quinndary Weatherspoon were the other finalists.

Saiz is averaging 15.1 points while leading the Southeastern Conference in rebounding at 10.9 boards a game. The SEC’s active career leading rebounder, Saiz is the only player in the league averaging a double-double.

The 6-foot-9 senior forward recorded his 19th double-double of the season with 21 points and 15 rebounds in the Rebels’ 75-70 win over South Carolina on Saturday. He’s got 28 for his career.

Saiz is shooting 48 percent from the field and 73 percent from the free-throw line. The Spaniard has added some range to his game, making 20 3-pointers this season after attempting just 10 of them his first three seasons.

A three-year starter, Saiz has amassed 1,198 points and 937 rebounds in his career. He joins Murphy Holloway as the only players in program history in the 1,000-point, 900-rebound club.

“The thing I’ll remember is his presence, his approach and who he is,” Ole Miss coach Andy Kennedy said. “He’s got a great spirit. He’s a positive kid. He’s going to be very successful, and he’s meant a lot to this program. Never had a bad day. He’s that guy that you really want to pull for.”