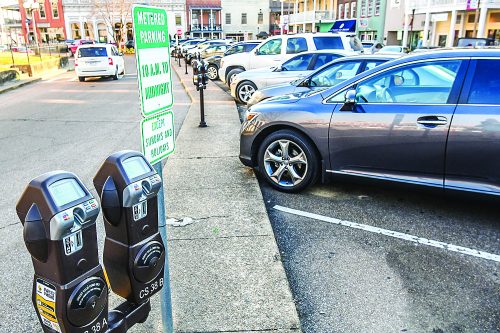 Raising the fee for parking meters by a quarter an hour has increased revenue for the city by about $2,000 a month.

In late 2016, the Oxford Board of Aldermen approved raising the parking meter fee that went into effect in the first week of January.

The raise was one way the city hopes to have enough revenue to pay for a new downtown parking garage. The board also extended the hours paid parking is enforced, from 10 a.m. to 10 p.m. Monday through Saturday from 10 a.m. to midnight.

In October, during the height of football season, the average weekly meter revenue was about $12,000, with the highest week yielding $13,688. Since the increase in the fee and hours, the average weekly revenue is around $15,000 with the highest week reaching $16,691 between Feb. 13-19. Saturdays bring in the most revenue with an average of $53,628 collected on Saturdays since Oct. 1, when the city’s fiscal year begins, compared to Mondays, which earned an average of $28,205.

The proposed parking garage will be paid for with a bond. The yearly payment for that bond could be about $800,000. City officials have stated that the garage needs to be paid for through parking revenue as they do not want to raise taxes to pay for the bond or maintenance of the garage.

The city is currently advertising for Requests for Proposals for architect teams to design the future garage.

The sensors would allow drivers to use an app to find empty metered spaces around the Square. They could also be programmed to clear a meter once a vehicle has left the space, avoiding some from parking on another’s “dime.”

The estimated cost for the sensors would be about $119,000 to purchase the sensors and install them.

Davis said the batteries would need to be changed about every two to three years.

“We haven’t really checked into all of the sensors’ capabilities yet,” Davis said. “I was just looking into the cost for the hardware.”

The commission took no action on the sensors Friday but agreed to continue looking into installing them in the future.

Two Oxford Board of Aldermen candidates qualify on last…