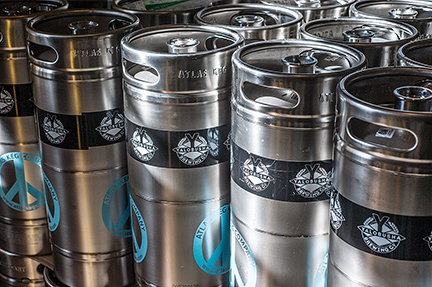 Bruce Newman Kegs of craft beer at Yalobusha Brewing Company are ready for distribution. Soon, the Water Valley brewery may be able to sell their beer on the premises if legislation clears the state legislature this session.

Craft brewers are one legislative step away from being allowed to sell their beer on the premises of breweries themselves.

The Senate last Thursday passed a bill that would allow Mississippi breweries to sell their own beer by bulk (up to 576 ounces per day per customer, or about two cases of beer) and in on-site brewpubs, where visitors can order and drink beer on the premises.

The bill now moves back to the House for concurrence on slight amendments made by the Senate. If approved there, it will head to the governor’s desk for his signature.

Proponents of the bill, both Republicans and Democrats, believe the bill will increase tourism and level the playing field for Mississippi breweries.

“This bill would really give our state’s breweries a chance to draw people in and make a good impression on folks,” said Sen. David Blount, D-Jackson, who co-sponsored a similar bill this session. “I’m optimistic we can get the law changed this year. It’s been a bipartisan effort from the beginning.”

Craft brewery advocates have long argued the need for the legislation. All four neighboring states allow on-site sales at breweries.

“There’s been a lot of work in the offseason to bring together other parties affected, particularly distributors,” Blount said. “Everyone has been on the same page, and this is a good thing for the state.”

Just eight senators voted against the legislation Thursday. In early February, the House voted 94-23 to pass the bill.

At least 14 craft breweries operate in Mississippi, including Water Valley’s Yalobusha Brewing Co., owned by Andy O’Bryan, who said last month he’s pleased with the progress of this legislation that has been in the works for a while.

“Lazy Magnolia, our state’s oldest brewery, has been lobbying for updates to our laws regarding breweries for a long time,” O’Bryan said after the bill cleared a House committee last month. “Now we have nine breweries in the state and we want to keep growing that number. Without the passage of a direct sale provision, we will continue to have a major competitive imbalance between us and other states and it will keep our growth down or stagnant.