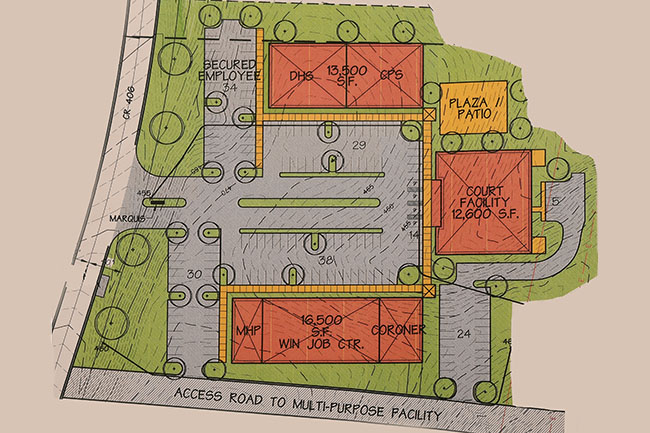 A schematic from architect Cory Alger on the proposed Lafayette County Office Park was presented to the county Board of Supervisors on Monday.

Site work can now officially begin on the new Lafayette County Office Park that will be located on County Road 406.

During their regular meeting Monday evening, the Board of Supervisors approved the recommendation of the county planning commission to do site preparation. Supervisors also approved a commercial site plan for the facility.

Crews will grade 25 of the 50 acres on the site, according to County Engineer Larry Britt.

The supervisors unanimously approved for the work to begin.

Supervisors also unanimously approved hiring local architect Cory Alger to design the facility. Alger gave a presentation in January on what the facility could look like.

With the Mississippi Department of Transportation purchasing county property for the Highway 7 expansion, county officials need to relocate several agencies, including the Mississippi Highway Patrol, Department of Human Services, and Child Protective Services. Officials have also decided to relocate the WIN Job Center and the county coroner office into the new building. Future development includes a multipurpose facility, as well as an amphitheater and three-plus acre pond.

Last month, the Board of Supervisors approved a bid from Koehn Construction for $667,595 to begin site work and approved an intent resolution to issue up to a $20 million bond for road and building projects, including the new Office Park.

Plans for the city of Oxford to lease a portion of the justice court facility that would house municipal court are currently up in the air after city and county attorneys discovered an Attorney General’s Opinion that states municipalities should operate their municipal courts inside the city limits.

Oxford’s Municipal Court is now located inside City Hall and has outgrown the space available there.

“Before you vote on the lease, we have to discuss annexation,” he said.

The board members went into executive session but took no action.

City officials may have to consider annexing the land the County Office Park will be built on.

“We think going in with the county on this is a win-win situation,” said Mayor Pat Patterson last month. “We will have to look at annexation. There’s a number of details we have to consider.”

The lease agreement issue is on the agenda for tonight’s regular Board of Aldermen meeting set for 5 p.m. in City Hall.