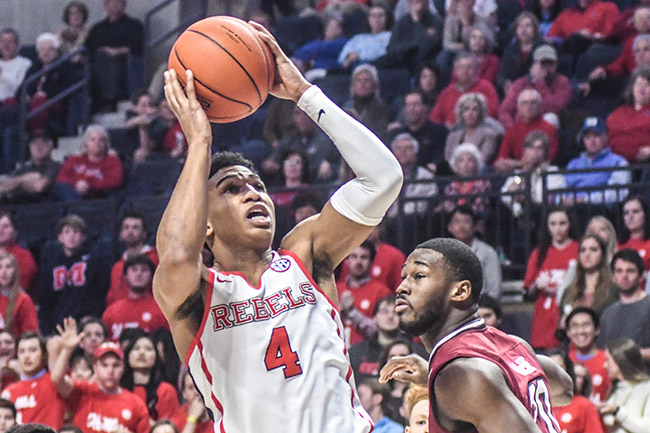 South Carolina coach Frank Martin and Ole Miss coach Andy Kennedy are tight, so when the Rebels beat South Carolina on Saturday for their best win from an RPI standpoint, Martin started the postseason campaign for his friend’s team.

“I have no idea why no one is even mentioning Ole Miss as a team that has a chance to make the NCAA Tournament,” said Martin, whose team finished third in the Southeastern Conference and will be in the NCAAs regardless of what happens in this week’s SEC Tournament.

Kennedy jokingly suggested placing Martin on the tournament selection committee, but the reality, Kennedy admitted, is that the Rebels’ numbers aren’t good enough. And unless Ole Miss can make another upset run to the conference tournament championship in Nashville, Tennessee, this week, none of them will likely matter.

Ole Miss (19-12) tied Alabama for fifth in the regular-season standings but lost to the Crimson Tide in the teams’ only meeting. The Rebels, who are 68th in the NCAA’s latest RPI rankings, are 5-12 against RPI top-100 teams and just 2-8 against the top 50 with the win over South Carolina being their only one over a team that’s an NCAA lock.

“We’ve got a couple, but we need more credible wins,” senior forward Sebastian Saiz said. “I feel if we can get one or two more in the tournament, I think we can be on (the bubble).”

Ole Miss will be the No. 6 seed in the SEC Tournament when it faces either Missouri (7-23) or Auburn (18-13) late Thursday night at Bridgestone Arena — a pair of teams the Rebels swept during the regular season — but that game will be about survival. Anything of resume-building substance would first come Friday against Arkansas while a semifinal date with Florida would await Ole Miss on Saturday if the rest of the tournament goes chalk.

Getting to Sunday’s championship game may nudge Ole Miss back into the at-large conversation depending on what happens around the country in other conference tournaments, but the Rebels in all likelihood have to cut down the nets in Nashville if they want to avoid missing out on the NCAA Tournament for the second straight year. The Marshall Henderson-led Rebels did it in 2013, but Ole Miss has won just one conference tournament game since.

“I’ve got great memories of Nashville,” Kennedy said. “It wasn’t too long ago that we made a magical run. Does this team have one in it? I don’t know. But I do know that (Saturday) was a positive step for us, and I know we’ll go into Nashville with a lot of momentum.”

What Ole Miss doesn’t know is if leading scorer Deandre Burnett will play Thursday. Burnett, who’s averaging 16.5 points a game, watched Saturday’s game from the bench in street clothes with a sore knee.

“He’s working hard every day in the training room to get his knees ready to play,” Armstrong said. “He’ll obviously be a game-time decision, but he’s making progress for sure.”

The Rebels missed Burnett the most at the free-throw line against South Carolina, shooting just 62.5 percent (15 of 24) from the charity stripe without the SEC’s leading free-throw shooter. Ole Miss needs all the help it can get as it enters its most important week of the season.

“We’ve just got to keep going and keep winning,” Saiz said. “That’s the only mindset we can have now.”