Oxford boys come close but fall to Laurel in 5A semifinals 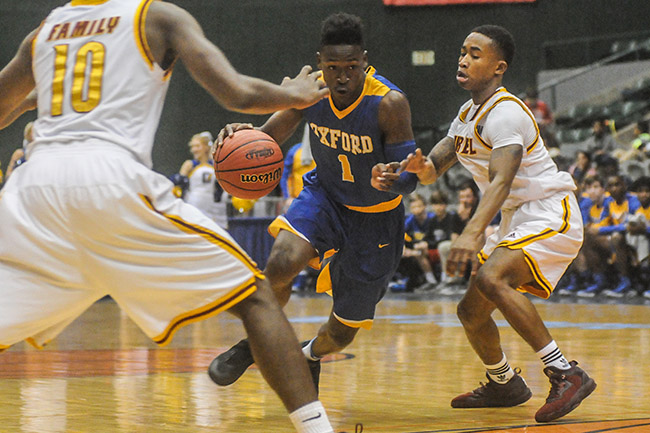 Oxford High’s Jarkel Joiner drives against Lautel’s Charles Winston in the MHSAA CLass 5A semifinals at the Mississippi Coliseum in Jackson on Tuesday. The Chargers lost 67-65, ending their season. (Jake Thompson)

JACKSON — After getting past Wayne County and the quarterfinal round last Saturday, the Oxford High boys basketball team had eliminated one participant of last year’s Class 5A state championship game. The tougher task awaited them on Tuesday night when they faced the defending 5A champions in Laurel. The Chargers looked up to the tall order of usurping the Tornadoes from their throne, but foul trouble and turnovers proved too costly to overcome as Laurel defeated Oxford 67-65 at the Mississippi Coliseum.

The Tornadoes (22-8) will play Neshoba Central for the chance to repeat as Class 5A champions on Friday night. The Chargers season comes to an end with a record of 25-8.

Senior Jarkel Joiner’s remarkable high school career comes to a close after a game-high 35-point performance. He also had four rebounds but was 2-for-9 from 3-point range. He had a chance to tie the game at 65-all but missed the shot, though he did connect on his second three-pointer of the night as time expired. Joiner was the only Charger in double figures with junior Drew Bianco following with nine points while seniors Terry Williams and Cameron Bailey each added eight points.

“We were playing a good team, a disciplined team,” Oxford head coach Drew Tyler said of Laurel. “But, we kind of shot ourself in the foot early and we needed some heroics from Jarkel Joiner and we got them and he gave us a chance to win.”

Fouls became a problem for Oxford early as Bianco and J.J. Pegues each picked up three in the first half. They both eventually fouled out in the second half, causing Tyler to have to rely on his bench early and often. Bailey was the key player off Oxford’s bench, scoring the only points besides the starters. Bailey also pulled down three rebounds and had two assists.

“I thought Bailey gives a lot of energy and does a lot of dirty work around the goal,” Tyler said. “Definitely helped us out. We would get something on defense as far as substitution and then we were sort of out of synce on offense.”

Controlling and keeping the ball was another issue for Oxford, who committed 20 turnovers, leading to a lot of transition buckets and easy points for Laurel. Dontario Drummond led the Tornadoes with 29 points while Troymain Crosby scored 18 to be the only Laurel players in double figures. Oxford out rebounded the Tornadoes 35-33 but failed on many second-chance opportunities.

“I felt like we were on defense the majority of the night,” Tyler said. “The game had a lot of different looks, it really did. With a lot of kids we had come off the bench, I’m sure they had butterflies. …I wasn’t surprised by anything. (Laurel) did everything we saw on film.”

Ole Miss pieces it together to blank Georgia State,…