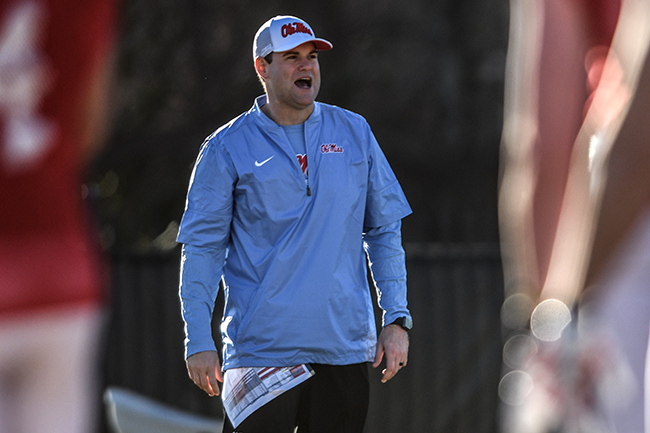 He wasn’t Hugh Freeze’s first choice, but Jacob Peeler is thrilled to be back anyway.

Peeler is going through his first spring as Ole Miss’ receivers coach, part of the Rebels’ staff overhaul this offseason. Freeze hired five new assistants — seven if you include two others who left for other jobs weeks after being hired — but Peeler is the only one with Mississippi roots.

“ I feel like I’m home,” Peeler said. “I wake up every day, and it still hasn’t completely set in that I’m at Ole Miss. I grew up going to that stadium, going to the Tad Pad and going to baseball games with my parents. It’s a surreal moment for me, and I’m truly excited to be on this staff.”

A Kosciusko native, Peeler has been a fast riser in the coaching ranks since his days as an offensive lineman at Louisiana Tech. He was on Sonny Dykes’ staff at his alma matter before following Dykes to California, where he was a graduate assistant before coaching receivers for the last two seasons.

Freeze initially tabbed Oregon offensive coordinator Matt Lubick to return to Ole Miss to coach receivers, but Lubick, who has since joined Washington’s staff, left after a little more than a week to be the offensive coordinator at Baylor. Freeze then targeted Peeler, whose recruiting abilities have gotten equally as much praise.

Peeler helped Cal dip into the Rebels’ backyard to sign Jordan Duncan out of Hattiesburg in 2016 and made the Bears a major player for Ole Miss receiver and former Starkville standout A.J. Brown before Brown ultimately chose the Rebels. His biggest coup from the Southeast was former Georgia prep star Demetris Robertson, who signed with Cal as the nation’s top-ranked high school receiver in the 2016 recruiting cycle.

“Jacob has quickly developed a reputation as an elite recruiter and an outstanding offensive coach who relates well to his players,” Freeze said when Peeler was hired.

Even with an NCAA investigation hanging over Ole Miss’ program that’s resulted in a self-imposed bowl ban for next season after Peeler was hired, Peeler didn’t hesitate to join the Rebels’ staff. Peeler also wasn’t working for Dykes, who was fired by Cal in January.

Peeler said Freeze was honest about what could be coming as a result of the probe, and it’s the same approach Peeler said he’s taken on the road with him recruiting for the Rebels.

“That’s who we are,” Peeler said. “It’s not a recruiting tactic. It’s not a sales tactic. It’s just the truth. You’re going to win and lose some battles with that, but I’d rather go home at night knowing I was telling the kid what was real versus what they wanted to hear. I think that’ll win a lot of battles in the end.”

Peeler already has one of the more talented position groups on the roster with the receivers that are on campus. Gone are Quincy Adeboyejo, Damore’ea Stringfellow and tight end Evan Engram, but Peeler said he likes the potential of a unit that includes Brown, D.K. Metcalf and DaMarkus Lodge.

Peeler cautioned there’s a long way to go to get his group playing at a high level in a new offense before next season rolls around, but he’s happy to finally be settling in with a familiar coach in a familiar place.

“I’m a Mississippi kid, grew up in this state, born and raised and grew up an Ole Miss fan,” Peeler said. “I was able to watch Coach Freeze and the things he’s been able to do and the success he’s been able to have. The biggest thing I think is (players and recruits) see it in your face as a coach. Kids can see when you’re being genuine and being real with them.”

Terence Davis working to stay on the floor for…