During their Monday meeting, the Lafayette County Board of Supervisors awarded the bid to Cascade Cart Solutions for the roll out containers to be used for curbside garbage pickup. The containers are compatible with current garbage trucks, as well as a new garbage truck the county ordered. The trucks have lever that will grab the can and tip it into the truck.

Solid Waste manager Kenneth Drewery told the board in September each household will receive one container that will include a chip device registered to that home. The chips do not have GPS for tracking them, but they will enable sanitation workers to know which container goes with which home, as well as determine which households have paid their monthly garbage bill.

The county will purchase approximately 10,500 of the roll out containers at a cost of $461,895, according to county administrator Lisa Carwyle.

“The containers will be shipped within 2-4 months after we approve artwork on the side,” said Carwyle.

“We are trying to help with some of the litter and trash problems we have on the side of the road,” explained District 3 Supervisor Chad McLarty, who brought up the idea of the trash containers during budget hearings in July. “We felt like as a board, this would be a worthwhile venture that a lot of other counties are using. We hope it helps. Hopefully we can get some of these garbage bins off the side of the road. Some of them are long overdue.”

The new garbage truck the county purchased will cost $250,000.  Carwyle said the new trucks will be phased in over time. They will be operated by one person with a lift arm that will pick up the 96-gallon container and dispose of garbage into the truck. 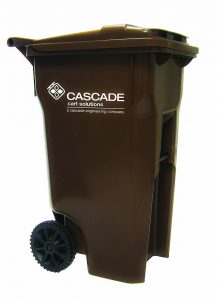 Lafayette County residents will be receiving new roll out 96-gallon containers for garbage collection after the county awarded a bid to Cascade Cart Solutions.

“This would allow for the sanitation workers to pull a lever that would turn the container over and dump into the truck, eliminating the need for them to physically pick the containers up,” said Carwyle.

it will also free up more personnel for litter control.

Currently, trash collection is charged to people when they purchase a vehicle tag in the county.

“We got landlords renting places to students with out-of-state tags,” Drewery told supervisors last July during budget hearings. “I really hate to think of how much money we’re not collecting.”