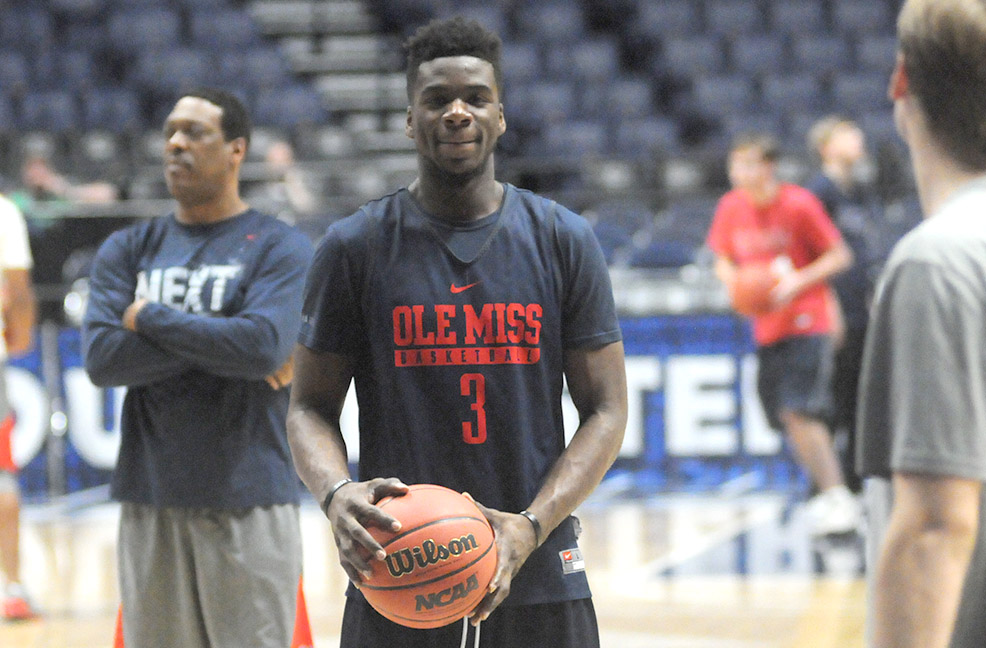 Barring any other setbacks, Ole Miss will have its full complement of guards for the Southeastern Conference Tournament.

Davis has been arguably the SEC’s most improved player by seizing a much larger role this season. The Rebels’ sophomore guard is averaging 14 points and 5.3 rebounds after scoring just 1.8 points a game a season ago, but foul trouble has limited Davis’ effectiveness at times.

“It’s something I’ve got to cut out on my own,” Davis said. “I go into games thinking of not fouling and then I end up fouling.”

Davis has played fewer than 28 minutes in seven of the last nine games yet had the best scoring nights of his career in two of those, a testament to his ability to score points in bunches when he gets going in the open floor. He had 26 points in 24 minutes against Auburn on Feb. 11 and followed that with a 33-point outing in just 27 minutes against LSU.

But the 6-foot-4, 201-pounder didn’t score more than 12 points in any of the Rebels’ last four regular-season games, often spending long stretches on the bench after picking up multiple fouls within the first few minutes. Davis had at least three fouls in all but one of those games.

“It’s just hard for him to catch a rhythm with the way he’s in and out of games based on fouls,” Ole Miss coach Andy Kennedy said. “I think he’s really putting some pressure on himself, and he’s compounding that by having to be on the bench with fouls.”

Davis has made a habit of using his hands too much, something he said Kennedy constantly reminds him isn’t necessary for someone with Davis’ level of athleticism. But Davis admitted some of it has been taking the offensive frustrations with him to the other end of the court.

“Coach will tell you that, too,” Davis said. “Whenever I’m not having a good offensive game, I get frustrated and end up picking up ticky-tack fouls on the defensive end. I get mad at myself.

“For us to be successful, I have to be on the floor. He always says that every game when I get in foul trouble.”

His dissatisfaction boiled over in Ole Miss’ regular-season finale against South Carolina when he matched a season-low with three points in just 20 minutes. Davis picked up his fourth foul with 13:53 left and subsequently fouled out when he was hit with a technical after getting too mouthy with an official.

“You can’t do the things he did, especially in a game of that magnitude,” Kennedy said. “He picks up a fourth. You’re playing with your hands, maybe you’re a bit late, bang-bang play, you’re called and then you say something. … He’s got to learn to grow up and take on more of a mentality that he’s very important to this team and this program.”

Chances are good Ole Miss (19-12) will have leading scorer Deandre Burnett back for Thursday’s tournament opener against Auburn or Missouri (8:30 p.m., SEC Network). Kennedy said Burnett, who missed the South Carolina game with sore knees, will be a game-time decision but added he’d be “surprised” if Burnett didn’t play.

The Rebels need their third-leading scorer on the floor as much as possible, too, if they’re going to make things interesting for themselves in Nashville. With a postseason resume lacking quality wins — the Rebels are 5-12 against top-100 RPI teams and just 2-8 against the top 50 — Ole Miss in all likelihood has to win the tournament to earn an NCAA Tournament bid.

“(Davis) can obviously get to the basket, knock down shots and put the ball in the basket pretty good,” Burnett said. “We need him on the court. He’s just an extra scorer that we need on the court at all times.”