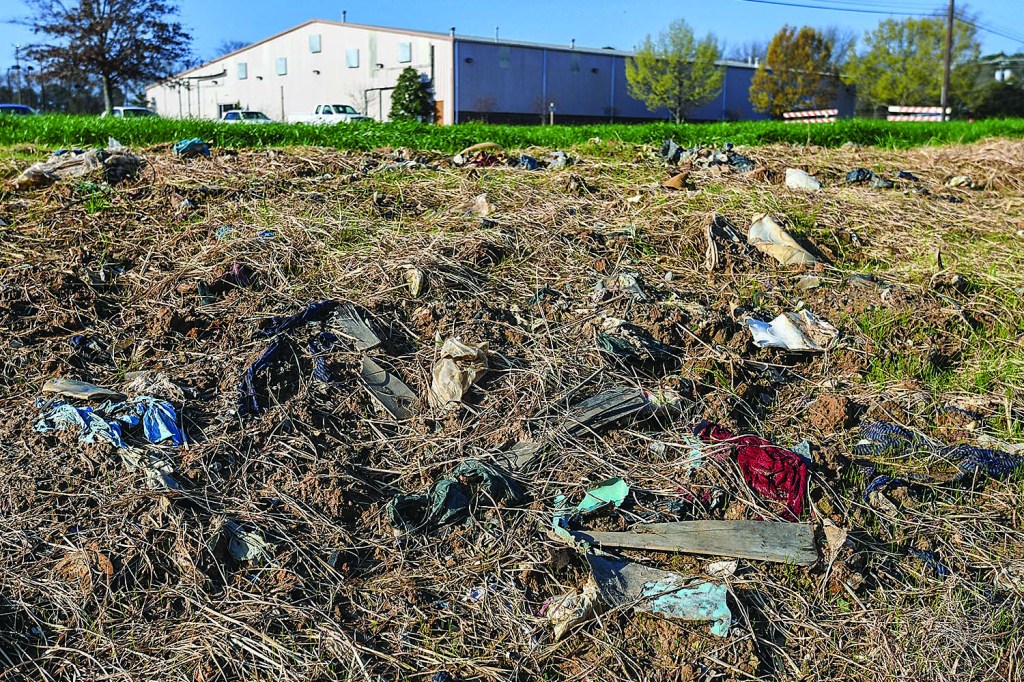 Debris and trash are visible between the recently rerouted Price Street and the Oxford Activity Center, in Oxford, Miss. on Thursday, March 9, 2017.

One man’s trash may be another man’s treasure, but tons of trash recently found underneath Oxford Park Commission property is proving to be anything but buried riches.

With preliminary plans in place for a new activity center, representatives from the Pryor Morrow architect firm were on the agenda for the Oxford Board of Aldermen’s meeting Tuesday to present those plans to the board.

However, after receiving a report back from a geotechnical engineer recently, the agenda item was pulled and instead, city officials met Wednesday at the OPC office where they were told why the presentation wasn’t made Tuesday evening.

Price Street was relocated to give OPC more room on its campus to build another activity center to provide more basketball courts, classroom space and other amenities for the LOU community. It was known that the land was once used as a city dump and there was still trash under the ground.

OPC Director Seth Gaines said it was planned to remove 5 feet of trash from under the pad of the proposed activity center and 3 feet from under the area where a new parking lot was to be built.

“The geotechnical engineers said they would only sign off on the project if we removed 12 feet (of trash) from the entire site,” Gaines told aldermen Janice Antonow, Robyn Tannehill and Jason Bailey Wednesday morning. “All the work that’s already been done by the architects is back to null now.”

Gaines said the cost to haul off the trash is about $750 a truckload, compared to about $135 a truckload to haul off natural debris from a construction site.

The city is not legally required to follow the advice of the geotechnical engineer; however, not doing so could lead to liability issues down the road.

Robinson said he would feel safe removing 5 feet of the trash underneath the parking garage.

“There may be some settlement down the road we’d have to deal with but that garbage has been there for a long time, as well as a parking lot on top of it where there was one area in the northeast corner of the parking lot that had a pretty good dip in it,” he said. “It’s a risk I’d personally be able to take.”

One possible location could be the city-owned land near the Oxford and Lafayette Humane Society on McLarty Road where adult soccer fields are currently located, which could be moved to the property where the activity center was originally going to be built.

“I’d hate to give up our vision of having everything on one OPC campus,” she said.

Gaines said conversations will continue between OPC, its board members and city leaders as to which direction to take in regards to the new center.