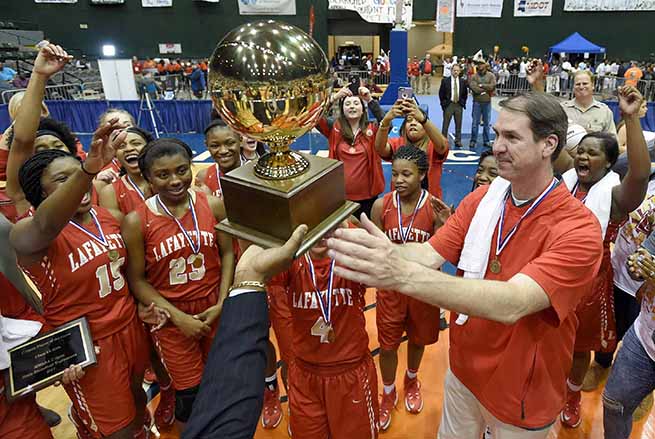 JACKSON — The mission was to take one step further than they did a season ago. After it was all said and done, the Lafayette High girls basketball team took all the steps they could, defeating Ripley 55-45 in the MHSAA Class 4A state championship inside the Mississippi Coliseum on Thursday night.

It is the second state title in program history for Lady ‘Dores with their first coming in 1982, defeating Stone 42-38 with future Ole Miss great Jennifer Gillom on the team.

“I’m extremely proud,” Lafayette head coach Shayne Linzy said. “This a group that worked hard really hard all year. My hat’s off to Ripley, because they came in with a great gameplan and they really got after us.”

Heading into the matchup it had all the makings of a potential runaway for Lafayette (30-3), who had defeated Ripley twice already this season by an average margin of 28.5 points. It turned in to any but a sleeper of a game.

Lafayette controlled the first quarter, grabbing a commanding 17-8 lead after the first eight minutes, but Ripley (19-11) decided to not turn tail and let the Commodores waltz their way to the ‘Gold Ball’ trophy. The Tigers used a lopsided foul margin – Lafayette had 10 team fouls to Ripley’s 2 late in the first half – as well as outscoring the Commodores 15-12 to make it a six point Lafayette lead at halftime.

“Welcome to girls basketball,” Linzy said. “That’s just the way it is. It goes in runs. Bottom line, this is the third time that we’ve played each other. We were all very familiar with one another, so I knew that this was going to be a dog fight no matter what the two previous games were.”

Senior Shaniyah Buford scored a game-high 24 points in her final high school game as well as pulled down four rebounds. To be named the game’s Most Valuable Player. Sophomore Mariah Holland scored 13 points to join Buford to be the only two Commodores in double figures. Freshman Azariah Buford scored four points.

“I’ve been trying (to win a championship) since I was an eighth grader,” Shaniayh Buford said. “The dream finally came true. Shout out to my team because they pushed me everyday in practice and I pushed them everyday.”

It was a grueling final 8 minutes, 20 seconds for Linzy, who picked up a technical foul and had to sit on the bench and coach his team the rest of the way. The Commodores responded by closing the game out with a 15-point final quarter to clinch the championship.

“It was the longest eight minutes to sit down,” Linzy said. “They did a great job. I’m going to fight for my kids just like every other coach is. It’s just one of those games where it happens. The girls responded the way that I had hoped. I told them, ‘I’m always going to keep fighting for you, you keep fighting for me.’