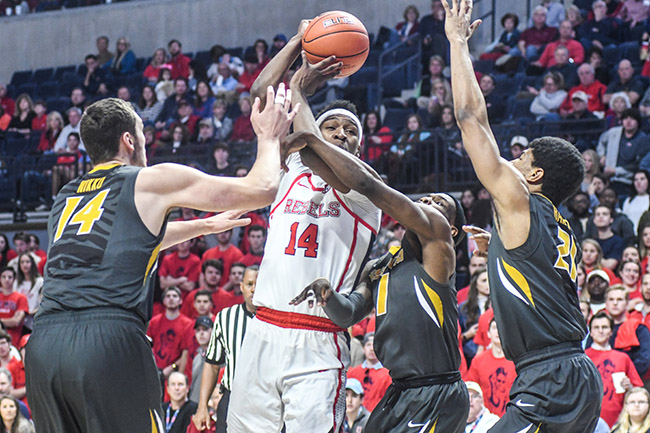 Ole Miss guard Rasheed Brooks (14) is fouled by Missouri guard Terrence Phillips (1) as Missouri forward Reed Nikko (14) and Missouri forward Jordan Barnett (21) also defend at The Pavilion at Ole Miss on Saturday, February 25, 2017. The teams will meet again tonight in the second round of the SEC Tournament. (Bruce Newman, Oxford Eagle via AP)

NASHVILLE, Tenn. — Ole Miss knew it would be trying to beat a team for a third time in its opening game of the Southeastern Conference Tournament.

The Rebels will do it against the one not many expected.

Ole Miss will begin what it hopes is a lengthy stay in Nashville, Tennessee tonight against 14-seed Missouri (8:30 p.m., SEC Network). The Tigers had the worst record among Power Five teams during the regular season at 7-23 and have already fired coach Kim Anderson effective at the end of the season, but Missouri (8-23) stunned Auburn 86-83 late Wednesday night on Kevin Puryear’s last-second 3-pointer in overtime, rallying from 10 down with five minutes left just to force extra time.

Ole Miss (19-12) swept the Tigers during the regular season, but it wasn’t easy as the Rebels won those games by a combined seven points, including a three-point win at home two Saturdays ago. It may be an easier matchup on paper, but Ole Miss coach Andy Kennedy thinks it’s Missouri that heads into the matchup with somewhat of an advantage.

“Long term, having to win five games in five days is pretty tough to do, but I do think it’s an advantage whoever comes out of the first game versus us (Thursday) because they’ve had success on the court, they’ve seen the ball go in and they’ve won,” Kennedy said. “I think that’s helped them.”

Puryear (11.6) is one of three Missouri players averaging double figures. Jordan Barnett is the Tigers’ leading scorer at 12.1 points a game while Terrence Phillips is averaging 10.3. Missouri ranks 333rd nationally in 3-point field-goal percentage (30) but knocked down 47.1 percent of its treys (16 of 34) against Auburn.

Just playing Missouri, a sub-250 RPI team, will hurt Ole Miss’ RPI, which is at 68, but winning is all that matters for Ole Miss at this point. The Rebels would face Arkansas (28 RPI) on Friday if they get past Missouri and could face Florida (5) or Vanderbilt (45) in Saturday’s semifinals should they get that far.

Ole Miss, which has just two top-50 RPI wins, could crawl back onto the NCAA Tournament bubble if it’s able to make a run to Sunday’s championship, but the Rebels likely have to win it all to automatically go dancing.

“When you start looking at numbers, our biggest void is the lack of quality wins, the top-50 wins,” Kennedy said. “What this tournament is going to do is provide those opportunities if you can get through Thursday night.”

Said guard Terence Davis, “If we win it, we know we’re in, so that’s the only thing we think of.”

The Rebels also know any possible run has to start with the first one against a spirited Missouri team.

“Our mindset is just every game, we’ve got to go 1-0,” point guard Breein Tyree said. “We’re not looking ahead to the next game or the game after that. … We’re going to try to get that win and survive and move on.”