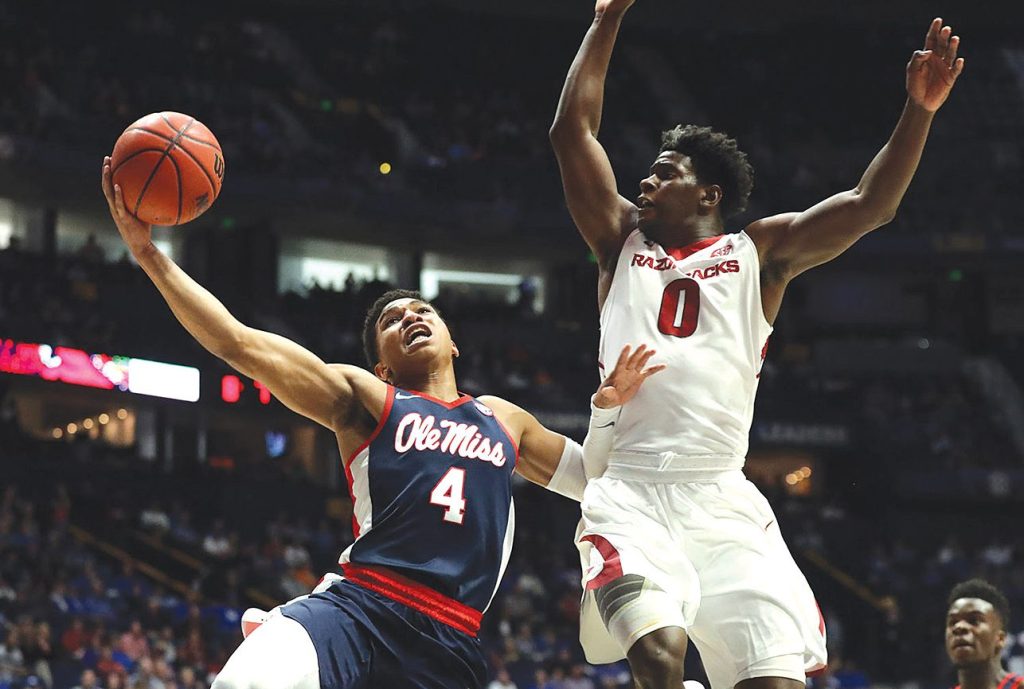 NASVHILLE, Tenn. — The biggest player on the court came up with the biggest plays, and Ole Miss’ NCAA Tournament hopes were dashed as a result.

Moses Kingsley blocked a pair of shots in the final minute, allowing Arkansas to hold off Ole Miss for a 73-72 win in the Southeastern Conference Tournament quarterfinals late Friday night at Bridgestone Arena.

Arkansas (24-8) advanced to a semifinal matchup against Vanderbilt on Saturday.

“Hard-fought game,” Ole Miss coach Andy Kennedy said. “Disappointed obviously that we weren’t able to advance. Arkansas made the plays down the stretch. We had opportunities.”

Terence Davis had a game-high 26 points for Ole Miss (20-13) while Deandre Burnett had 16 points and Breein Tyree scored 13, helping the Rebels stay close despite a rough offensive night for Sebastian Saiz. Kingsley had eight points, six rebounds and four of Arkansas’ seven blocks with his last two being the biggest.

Saiz grabbed an offensive rebound with Ole Miss trailing 71-70 with 58 seconds left, but Kingsley blocked the putback. Justas Furmanavicius forced a contested layup from Jaylen Barford, but a frantic scrum for possession underneath ended with the ball in the hands of Arkansas’ Daryl Macon, who hit a pair of free throws after being fouled.

“If we could’ve come up with that ball, not only do we have an opportunity to score in the open floor but their point guard is laying on the floor in the lane,” Kennedy said. “But they came up with it.”

Tyree drove the length of the floor and released a shot with 10 seconds left only for the Razorbacks’ 6-foot-10 All-SEC forward to swat it back to the perimeter. Burnett grabbed the loose ball and got it back to Tyree, whose desperation 3 with 3 seconds left fell short.

“We were just trying to make a play,” Davis said, “and the (SEC) Preseason Player of the Year made a great play.”

Likely needing to win the tournament to automatically qualify for the NCAA Tournament, the Rebels fell to 2-10 against top-50 RPI opponents and will wait to see if they receive a bid to the National Invitation Tournament when the 32-team field is announced Sunday night.

In the final conference tournament game of his career, Saiz went 4 of 16 from the field and didn’t make his first shot until the 9:14 mark of the second half. He helped Ole Miss finish plus-10 on the glass with a game-high 17 rebounds but had just nine points.

Macon, who scored 30 against the Rebels in an 18-point Arkansas win in the regular season, paced the Razorbacks with 17 points, nine of those coming from the free-throw line. Arkansas overcame a 36.5-percent clip from the field by going 20 of 23 from the charity stripe while Ole Miss made just eight of its 14 free throws.

Barford and Dusty Hannahs each added 13 points for Arkansas, which has won seven of its last eight games.

Saiz had just one point in the first half, but Davis, Tyree and Burnett picked up the slack. Davis was 6 of 13 from the floor and hit three of his first six 3-pointers for 15 first-half points while Tyree and Burnett combined to go 7 of 12 from the field in the first 20 minutes to help the Rebels offset nine turnovers that led to 16 Arkansas points.

Tyree’s elbow jumper as the clock wound down sent the teams to the half tied at 40 with the back and forth continuing as the Rebels kept up with Arkansas’ frenetic pace despite having played the night before. Arkansas ended up with 22 points off 13 Ole Miss turnovers, but neither team led by more than six in the second half.

But Arkansas had Kingsley, and Ole Miss didn’t.

Said Arkansas coach Mike Anderson, “We had a lot of guys make plays for us tonight, but Moses protecting that rim was big down the stretch.”