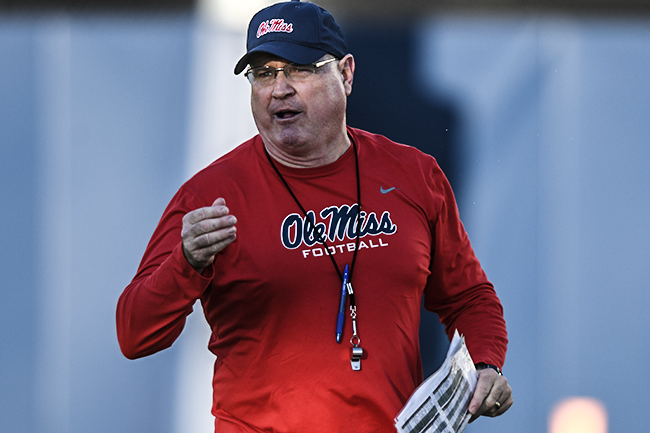 Bradley Dale Peveto isn’t privy to exactly how productive Ole Miss’ linebackers have or haven’t been in recent years nor does he care.

They’re all getting a fresh start with their new position coach.

Peveto is taking over a linebacking corps that was much maligned a season ago. Rising senior DeMarquis Gates had 79 tackles, but he was the only one in the group to record more than 44 stops on a defense that offered little resistance on the first two levels as the Rebels finished 120th nationally against the run.

Gates and Ray Ray Smith, one of the last remaining members of the 2013 class who’s been used primarily as a reserve, have spent a majority of the first three spring practices running with the first-team defense because Peveto wants to get a look at the seniors and work his way down.

“When you have a coaching change, sometimes it’s good to have a clean slate,” Peveto said. “We have two seniors, and they’re both getting their shot right now. With DeMarquis out, we started Ray Ray for the first two practices. He and DeMarquis shared the (first-team) reps (Tuesday). He’s getting his shot.”

Middle linebacker Rommel Mageo expired his one year of eligibility at Ole Miss as a graduate transfer, but Detric Bing-Dukes, Tayler Polk and Willie Hibler are also back. Freshman Donta Evans is in the fold after redshirting while junior college transfer Brenden Williams is going through the spring as one of four linebackers Ole Miss signed this year.

Gates led the Rebels in tackles despite being hampered with a knee injury late in the season. He was fully cleared to return to practice earlier than anticipated this spring and showed little hesitation his first time out Tuesday, Peveto said.

“He played physical,” Peveto added. “We had some physical drills versus the offense, some live drills, and he got in there and competed. Sometimes when you’re coming off an injury, it takes a practice or two to get that initial tentativeness out of you, but he didn’t have it.”

Peveto said he feels like the group has picked things up “extremely well” while learning first-year coordinator Wesley McGriff’s defense but also cautioned there’s a long way to go for a unit that’s trying to leave last year’s struggles and inconsistencies there.

“You take steps,” Peveto said. “It’s accumulative learning. It’s accumulative reps. It takes time. I told them that I’m not a magician and they’re not either. It comes with hard work, consistency and repetition. If we just keep doing the right things, we’ll be a good linebacker group.”

Linzy wanted to not ‘mess up’ while bringing title…