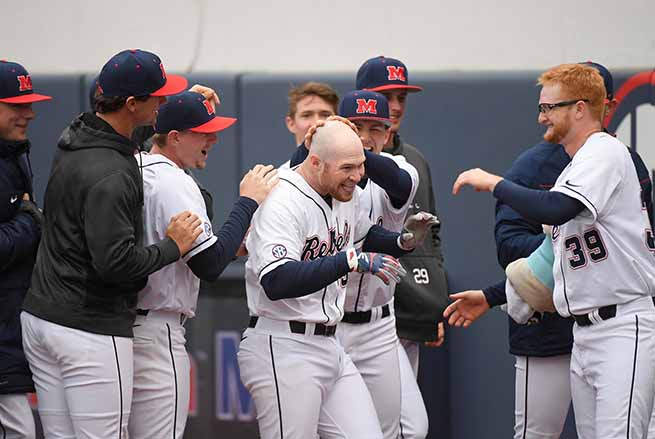 Teammates celebrate with Ole Miss' Michael Fitzsimmons after his two-run homerun in the second inning against Furman at Oxford-University Stadium on Saturday. The Rebels won 5-0. (Thomas Graning)

The No. 21 Ole Miss baseball team earned their third series win of the season on Saturday afternoon, defeating Furman 5-0 at Oxford-University Stadium. The Rebels will go for their third sweep of the season Sunday when they play the Paladins at 1:30 p.m. in the finale.

The offense is still coming in small doses for Ole Miss (10-5), scoring four runs on three hits and a Furman (8-6) error. Michael Fitzsimmons was responsible for three of the runs. The sophomore hit his first home run of the season with a shot over the left field wall in the bottom of the second inning for the 2-0 lead. While Fitzsimmons was at the plate in the third inning, second baseman Tate Blackman stole second while center fielder Ryan Olenek reached home on a poor throw by Furman catcher Cameron Whitehead to second. Fitzsimmons then reached first after an error by Paladin third baseman Jake Crawford, scoring Blackman from second. Ole Miss scored their fifth run in the eighth inning.

“One of the messages to the team is quit worrying about the batting average. Quit worrying about the hits,” Ole Miss head coach Mike Bianco said. “Part of winning is in between those, how productive and how efficient you are. …It wasn’t a very good day as far as hits, but it was a good day as far as moving runners and being efficient in one inning.”

Ole Miss starter Brady Feigl picked up his second win of the season, throwing eight innings of scoreless baseball. He gave up three hits, walked one and struck 10 Furman batters. Will Stokes pitched the ninth inning and gave up one hit.

Furman (8-6) put a little pressure on the Rebels in the eighth inning when Feigl had his only jam of the day with two Paladin runners on with one out. He struck out the remainder of the side without giving up a run.

“Coach (Bianco) talks a lot in the beginning about being to throw 0-0 (count) sliders and changeups because (Furman) seemed to take that a lot,” Feigl said. “I was able to do that today. …(Bianco) always preaches about getting out of there on your own terms. So, don’t come out of an inning with bases loaded, don’t leave a mess. That’s what I try to do is battle through it.”

Ole Miss ace David Parkinson faced the minimum in eight innings of work while the Rebels blanked Furman 2-0 in the opening game of the weekend series. Parkinson had nine strikeouts and gave up one hit. Will Stokes came in for his fourth save of the season but allowed two Paladin runners on in the ninth before getting out of the jam and preserving the win. It was nearly the first no-hitter in program history where Rebel pitchers faced the minimum before the two hits given up by Parkinson and Stokes.

The offense came from second baseman Tate Blackman with the junior going 1 for 4 at the plate with a run batted in, scoring shortstop Grae Kessinger in the fifth. Center fielder Ryan Olenek went 3 for 4 and scored Will Golsan in the third, who had reached on one of three Furman errors on the night. It was the first game back for both Blackman and third baseman Colby Bortles after serving a two-game suspension earlier in the week against Georgia State.