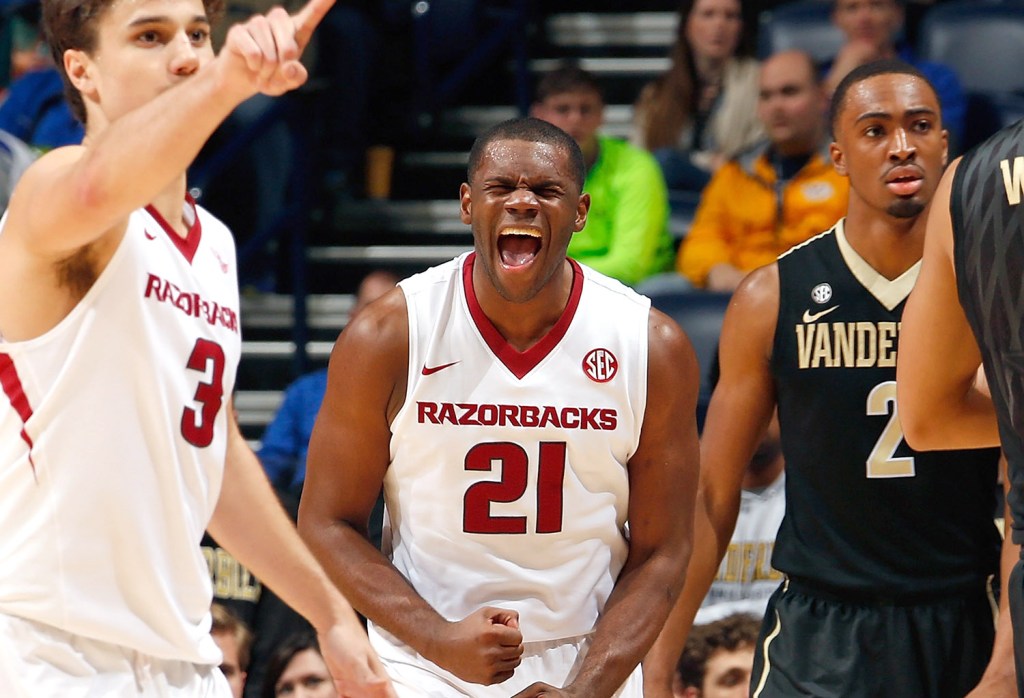 Arkansas' Manuale Watkins (21) reacts after making a basket against the Vanderbilt Commodores during the second half of an SEC Tournament semifinal game at Bridgestone Arena on Saturday in Nashville, Tenn. Arkansas won 76-62. (Frederick Breedon/Getty Images)

NASHVILLE, Tenn. — Arkansas gets its shot at redemption. Vanderbilt gets to wait.

Arkansas won for the eighth time in nine games with a 76-62 win over the Commodores on Saturday in the Southeastern Conference Tournament semifinals at Bridgestone Arena, earning a championship game rematch against Kentucky.

The No. 3-seeded Razorbacks will meet top-seeded Kentucky for the title Sunday at noon. The Wildcats handled Arkansas, 97-71, in the teams’ only regular-season Jan. 7 and beat the Razorbacks two years ago in the championship game for their first of back-to-back conference tournament titles.

“They’re a good team, but so are we,” said Arkansas guard Dusty Hannahs, who had 16 points Saturday as one of four Razorbacks in double figures. “We’re playing really good basketball, and we’re ready to face anybody in the country.”

Jaylen Barford had a game-high 18 points. Moses Kingsley had 12 points and 13 rebounds while Daryl Macon added 15 for Arkansas (25-8), which grinded out a one-point win over Ole Miss late Thursday night but still pushed the pace to wear down a Vanderbilt team playing its third game in as many days.

Arkansas scored 15 points off turnovers and limited the SEC’s best 3-point shooting team to just 26 percent (8 of 31) from beyond the arc. Arkansas led 35-31 at the break but opened the second half on a 21-4 run to grab the momentum for good, stretching its lead to as many as 27 with 8:55 left.

“We figured we had to come out and really kind of make the game chaotic for us and not let them get comfortable with what they want to do,” Arkansas coach Mike Anderson said. “Our defense was really good, especially starting off in the second half.”

Riley LaChance led Vanderbilt (19-15) with 12 points while Joe Toye chipped in 11, but the Commodores finished with nearly as many turnovers (15) as field goals (17).

“I think we we were a little run down,” LaChance said.

Arkansas is playing for seeding in the NCAA Tournament at this point while Vanderbilt will have to wait until Sunday to see if its 11 top-100 RPI wins, including three over No.  17 Florida, are enough to offset 15 losses in the eyes of the selection committee.

Opinions were varied before the Commodores, who have an RPI of 35, took the court Saturday. ESPN’s Joe Lunardi and USA Today’s Shelby Mast had Vanderbilt as a 10 seed and 8 seed in the tournament, respectively, while CBS Sports bracketologist Jerry Palm wasn’t as favorable toward Vanderbilt, listing the Commodores as one of the last four teams into the field.

Vanderbilt first-year coach Bryce Drew said the team will gather to watch the unveiling of the bracket on CBS starting at 4:30 p.m.

De’Aaron Fox scored a career-high 28 points, including 10 in the final 3:07, and No. 8 Kentucky survived Alabama’s upset bid to advance to its fourth straight SEC Tournament championship game.

Malik Monk had 20 points while Bam Adebayo added 10 points and nine rebounds for the Wildcats (28-5), who will go for a third straight title against Vanderbilt.

Dazon Ingram paced Alabama with 17 points before fouling out late. Braxton Key was the only other Tide player in double figures with 11 points.