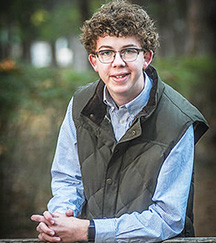 McCool, editor-in-chief of OHS’s The Charger newspaper, will advance to the Journalism Education Association’s (JEA) national Journalist of the Year contest to compete against other state winners. He will also receive a $250 check from the Mississippi Press Association at MSPA’s state convention on March 31.

“As the current Editor-In-Chief of The Charger, Davis has shown that he is not only a great writer, but possesses excellent people skills as well,” said McCool’s adviser, Diala Chaney. “He consistently treats all staff writers with the utmost respect, and is always willing to lend a helping hand to his less-experienced colleagues.”

McCool is a three-year student journalist and has earned multiple honors from MSPA, the Southern Interscholastic Press Association (SIPA), School Newspapers Online (SNO) and others during his career.

“This was an incredibly tough year for our judges,” MSPA director R.J. Morgan said. “But I’ve been involved with high school journalism in this state for 10 years, and I’ve seen few if any students with the talent, work ethic and humility of Davis McCool.”

McCool is the grandson of veteran journalist Curtis Wilkie, who covered everything from presidents to war zones during long career at the Boston Globe.

“This year The Charger has had a professional character about it, breaking off news reports that have led to major news stories in daily newspapers,” Wilkie said. “Their account of a proposal by authorities to divide the school along economic lines was even featured in the national press. It quickly resulted in a decision to drop the idea; an instance of the impact of strong journalism.”

The National High School Journalist of the Year will be announced on April 9 at the JEA/NSPA national convention in Seattle, Washington.