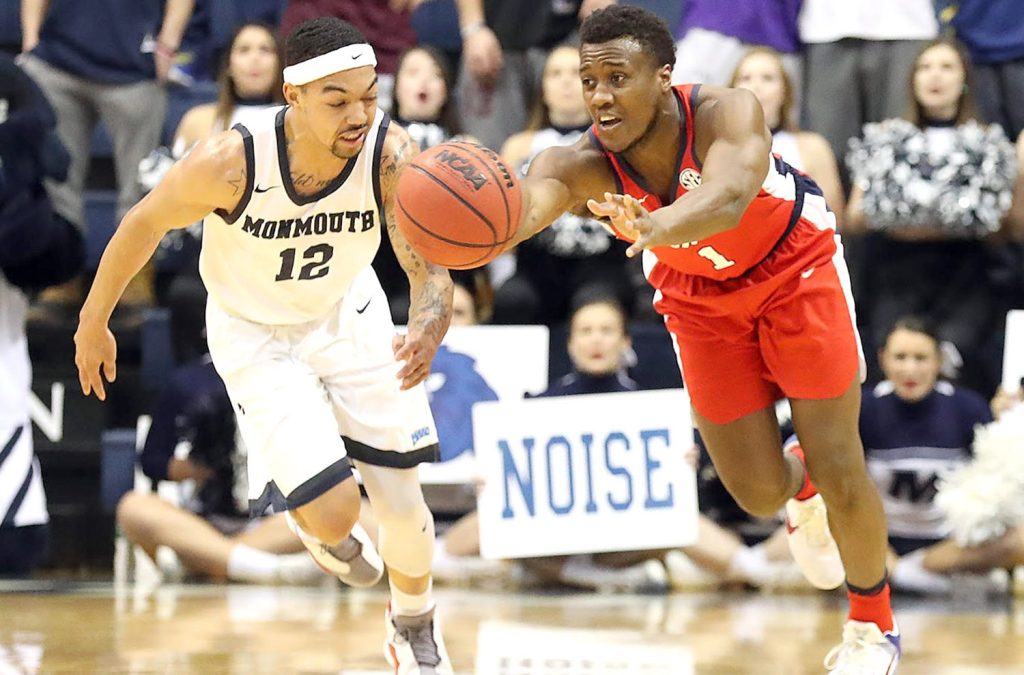 WEST ORANGE BRANCH, N.J. — Ole Miss came out with a win over Monmouth when they traveled to the Jersey Shore for the first round of the National Invitational Tournament on Tuesday.

The final score was 91-83 at OceanFirst Bank Center, but it doesn’t quite do the game justice with it being a tight game throughout.

Monmouth led for most of the first half in large part due to senior Josh Robinson being 4-for-9 from the 3-point line. Ole Miss (21-13) soon rallied back, however, and both teams seemed to trade off the lead with each new possession.

It wasn’t until late in the second half that the tide began to turn in Ole Miss’ favor with the Rebels holding a lead but not quite being able to pull away. Any hope for a Monmouth comeback, despite Robinson’s best efforts, died when Terence Davis notched a deep 3-pointer with three minutes left in the game, capping his own 5-0 run to make it 81-73.

Ole Miss knocked down five of its last six free throws in the final 54 seconds to salt it away.

Forward Sebastian Saiz had a phenomenal outing. He led the Rebels in points (23) and rebounds (11) and notched his 21st double-double of the season for his efforts, a new school record. He was also a perfect 10-for-10 from the free-throw line.

Ole Miss coach Andy Kennedy could not speak highly enough of the senior from Madrid, Spain.

“He’s been one of our best players all year, and (to) come on the road with a double-double and no turnovers, we’ll have to make sure he gets that game ball,” Kennedy said.

Another notable performance came from junior guard Deandre Burnett, who went 1-for-4 from the field in the first half but finished the game with 17 points on 6 of 14 shooting. Davis and New Jersey native Breein Tyree each chipped in 11 points for the Rebels, who got their first postseason win since 2015.

The Rebels will have a short respite before having to play the winner between Syracuse and UNC Greensboro in the second round. Ole Miss will either travel to face the top-seeded Orange or host Greensboro.

That game was postponed until Wednesday at 6 p.m. CT because of wintry weather.