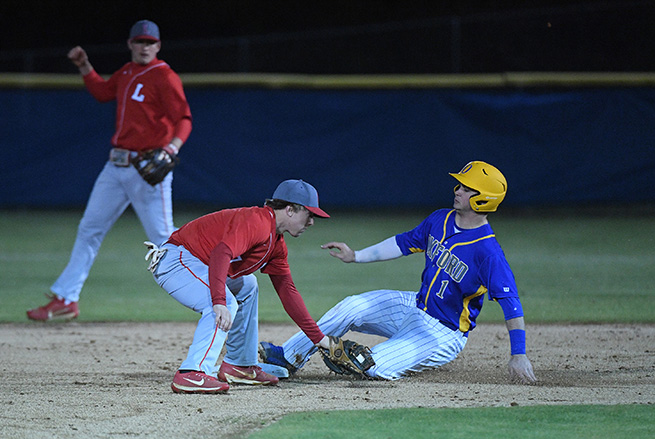 For the first time this season the crosstown rivalry between Oxford and Lafayette took place on the baseball diamond. For the majority of the game it was all Chargers, but a late rally by the Commodores made things interesting late before Oxford held on for the 8-4 win at Edwin Moak Field Monday night.

It capped off a rain-shortened first day of the Oxford Spring Break Classic, which continues today and wraps up on Thursday.

Carson Stinnett took the mound for Oxford (8-1) and earned his third win of the year, throwing five-plus innings and giving up one run on three hits and striking out seven Lafayette batters.

Stinnett was cruising until the sixth inning, where he issued three of his five walks in a row, throwing 12 balls in a row. Stinnett would be replaced by freshman Owen Bruce but the Commodores (3-6-1) took advantage of the free passes to scored their four runs in the sixth frame.

“I thought (Stinnett’s) velocity was the best it’s been all year,” Oxford head coach Chris Baughman said. “His efficiency, strikes to balls ratio was at 49 percent for the game. I feel like we let them in the ball game in the sixth when we really shouldn’t have.”

The Chargers were efficient at the plate as well, scoring all eight runs in the first four innings. Stinnett helped himself by hitting 3 for 4 and two RBIs. Clark Stovall also had 2 RBIs while going 1 for 3 on the night. Ben and Drew Bianco, CJ Terrell and Preston Perkins each had one RBI.

While Oxford had a clean game defensively, Lafayette committed five errors, with three of the coming in the sixth inning. The Commodores’ starting pitcher Colin Crawford went 2.2 innings, giving up five runs, all earned, off six hits and two walks. He did not record a strike out. The first two innings were seamless for Crawford, allowing only one run, but struggled mightily in the third with four runs on four hits and tossing nearly 40 pitches.

“As far as defense, I was happy until that last inning,” Lafayette head coach Greg Lewis said. “We scored four and then kind of really laid an egg out there. …The game plan was I was only going to throw (Crawford) two (innings) and I should’ve stuck to my game plan. He hadn’t thrown a lot of pitches until (the third inning) and he was doing a good job. I hated to pull him right then.”

Wilson Varner, Will Ard, Xavier Martin and Zach Meagrow accounted for the four runs with each recording an RBI. Ard went 2 for 3 at the plate while Varner, Martin and Meagrow all recorded an RBI without a hit.

Oxford will stay at home and will resume play on Wednesday when they host Water Valley at 1 p.m. followed by Lake Cormorant at 6:30. The Chargers will wrap up the Classic with a game against Clinton at 4 p.m. on Thursday.

Lafayette heads down to the coast to play in the ‘Battle at the Beach’ with games at Ocean Springs and Gulfport High Schools against teams from all over the state.