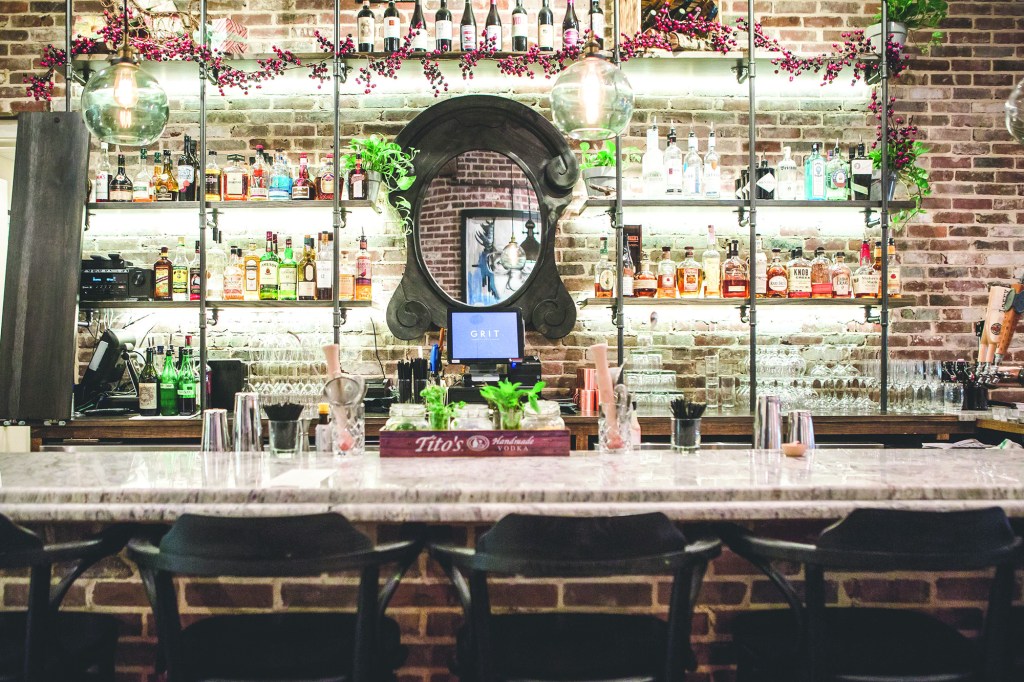 When a great opportunity presents itself, you take it. That’s exactly what husband-and-wife team Angie Sicurezza and Nick Reppond did when developing the concept for Grit, a Southern restaurant with locally sourced cuisine located just down the road in Taylor.

Both served in the restaurant business for many years. Sicurezza, a Connecticut native, held her first restaurant job when she was 14. In college, she worked for a catering company before moving on to restaurant management positions in places like Grand Cayman, British Columbia and Southern California. She landed in Oxford in 2009 with an opportunity to work with the City Grocery Restaurant Group as a special events coordinator and director of operations. It was here that she learned about the uniqueness of Southern cuisine.

And where she met Reppond.

Reppond, a Memphis native, also moved to Oxford in 2009 to work with the City Grocery group as a line cook, sous chef and production manager. He was raised on Southern staples, which his evident in his menu creations.

In 2015, Sicurezza and Reppond purchased A&N Catering of Batesville as an opportunity to explore their culinary creativity. The booming business of an Ole Miss football season led to a need for growth, so the couple sold their home in Oxford and moved to Taylor. Soon after, they were seeking a site to house a kitchen for their catering company.

A location on Taylor Square that was formerly an art gallery and antique shop became their space.

The original idea was to have a large catering kitchen with just a small cafe-style seating area. That idea evolved into a 102-seat restaurant which opened in June 2016.

“We could have just done catering, but we thought ‘here’s an opportunity for growth’ and it would be ridiculous to walk away,” Reppond says.

Just over a year ago, the two were vacationing in New York City for Christmas and brainstorming a name for the restaurant. Whether it was inspiration from the city or the realization of their motivation to seize the opportunity, the name “Grit” was born.

“We thought it defined who we were, and once we chose a name, it took on a life of its own,” Sicurezza says.

Reppond then developed the menus over several months, which include lunch items such as the Mississippi hot catfish sandwich and a meatloaf lunch plate with smoked tomato gravy and dinner choices including pan-seared strip loin, bourbon-molasses grilled quail with stir-fried collards and grilled lamb.

Both their food and drink menus exemplify Southern sophistication, but without a stuffy atmosphere.

“We want an atmosphere that’s comfortable and obtainable, not too threatening,” Sicurezza says. “We want it to be approachable.”

That approachability comes with a selection of more than a dozen types of bourbon, which fuels several of GRIT’s signature cocktails.

The Oxford American cocktail offers a unique twist on bourbon and coke. The drink is made with Four Roses, lemon, bitters, kola nut syrup (made in-house) and Coca-Cola ice cubes. Their standing seasonal cocktail, the Dason-Mixin, is bourbon-based with raw sugar and fruit — last summer it was peaches, muscadine last fall and now the drink is made with blood orange.

“I really think bourbon is part of our Southern heritage,” Reppond says. “We wanted to continue that by doing really cool stuff with bourbon in keeping with the Southern theme. We offer as many different bourbons as we can. For those that want it, we want to be able to supply it.”

Grit takes the Southern vibe one step further by integrating aspects of the Taylor community into every part of the restaurant.

Local woodworker John Haltom of Roxie Woodworks and Walter Neal constructed the bar shelving. Most of the plates were made by Keith Stewart Pottery. Obie Clark, owner of Tin Pan Alley, which formerly occupied the space, built all the tables using local wood. The walls of the restaurant serve as a rotating art gallery, an homage to the former business and to showcase local artists.

“Taylor is in here,” Sicurezza says.

Locality built the restaurant, so naturally, the ingredients of each dish are the same.

“We’re sophisticated-Southern with an emphasis on local and regional ingredients,” Reppond says. “We get everything as locally as we possibly can.”

He says the beef comes from Tennessee, the pork and lamb are from Como and most produce is from local farms in the region.

“I think in order to keep what we’re serving fresh, we order just enough at a time so we’re not sitting on product,” he says. “We want it to be the best it can be. We pride ourselves in giving everyone the service and excellence they deserve.”

The original version of this article appeared in the February issue of Oxford Magazine. You can subscribe at oxfordmag.com.