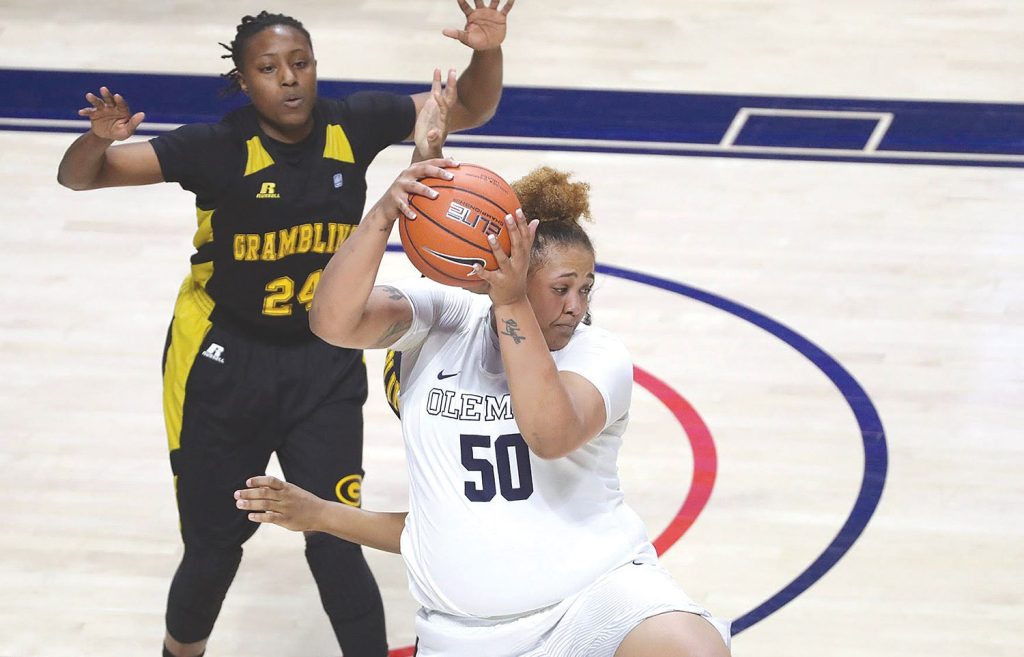 Ole Miss' Taylor Manuel (50) grabs a rebound in front of Grambling's Chantiara Lewis (24) in the first round of the Women's National Invitation Tournament on Thursday at The Pavilion in Oxford. Ole Miss' season ended with a 78-75 loss. (Joshua McCoy/Ole Miss Athletics)

Taylor Manuel scored a season-best, but it was not enough. In what might be considered a shock to some, Grambling defeated Ole Miss 78-75 in the first round of the Women’s National Invitation Tournament at The Pavilion on Thursday night.

With the game tied 75 all, Grambling’s John’ea Thompson hit a layup with 11 seconds left. Ole Miss failed to get a shot off out of a timeout, ending their season with a record of 17-14. It is the longest the Rebels’ season has lasted since making it to the third round of the WNIT in 2015 before falling to Middle Tennessee State.

“My job as we move into the offseason is to figure out why we’re in the NIT and how can we make sure we’re not in it again,” Ole Miss head coach Matt Insell said. “That’s something I’ll be working on for a week in my head and on paper, making sure we’re not in this game again.”

The speed and athleticism of the Tigers (19-14) rattled Ole Miss from the start. The Rebels took a quick 6-0 lead, but the Tigers responded with an 11-2 run and took the lead for the rest of the half. Grambling shot 6 of 13 from 3-point range in the first half, fueling a 45-33 lead at the break.

“I don’t really know,” Insell said when asked about his team’s poor shooting performance. “We gave them off a few days. We shot the ball extremely well in practice. … I think their legs went. I really do. They’re great shooters. They shoot it well. I think they just got tired.”

Ole Miss did not lead the game again until late in the fourth quarter when Shandricka Sessom hit a layup, putting the Rebels ahead 72-70 with 4:24 remaining. Sessom put Ole Miss in front again with a 3-pointer with less than two minutes remaining, but Grambling responded with a 3 of their own to tie it at 75 at the 1:41 mark.

Manuel scored a game-high, and season-high, 28 points and was two rebounds shy of a double-double, pulling down eight boards. Sessom finished with 18 points and nine rebounds. In her final game as a Rebel, Oxford native Erika Sisk finished with five points, three rebounds and five assists.