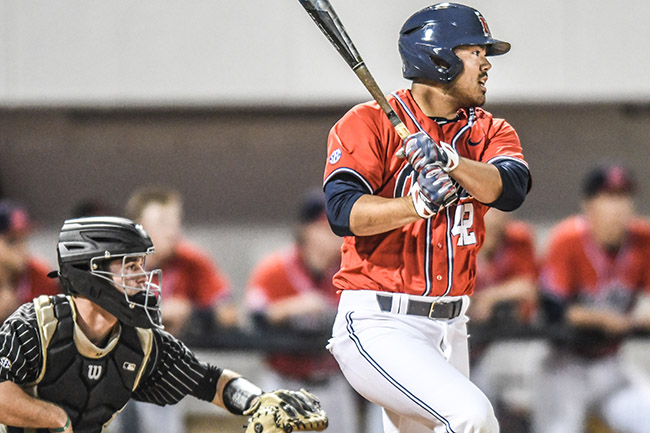 Ole Miss is averaging just over two runs a game over their last seven. On Friday, they needed only one. With another shutdown performance from a starter and a timely hit in the sixth inning, the No. 21 Rebels defeated Vanderbilt 1-0 in both teams’ Southeastern Conference opener at Oxford-University Stadium.

The win was Ole Miss’ fifth in a row and improved their record to 13-5 and 1-0 in SEC. It is also the fifth shutout by the Rebel pitching staff and sixth in the last seven games. They have allowed only two runs in that span. The streak of scoreless innings by Ole Miss pitchers has reached 45.

“I was mentally preparing myself in the dugout throughout the game until my name was called,” Rowe said. “Whenever I got up to bat I was expecting fastball.”

Ole Miss had their chances to blow the game open, loading the bases in the fourth with zero outs. Thomas Dillard poked a ball through the infield, but not before it hit Bortles and was ruled out for interference and erasing at least two runs off the board.

Rebel ace David Parkinson pitched six scoreless innings, giving up three hits and four walks while striking out five Commodore batters on 99 pitches. Parkinson worked his way out of some jams throughout the night. The biggest came in the third inning when Vanderbilt loaded the bases off two walks sandwiched around a single. Vanderbilt designated hitter Alonzo Jones was called out due to batter interference then first baseman Julian Infante grounded into an inning-ending double play.

Parkinson once again had to work out of trouble in the fourth after giving up a leadoff infield single off a bunt by third baseman Will Toffey. Parkinson then followed with two strikeouts and an infield fly to escape once again.

“Momentum shift,” Parkinson said when asked what he felt after working out of the jams. “That was a huge momentum shift for us. My leadoff batter was a big problem today. What was working was when I got a runner in scoring position, my slider, it was probably the only time it worked for me.”

Will Stokes worked two innings and Dallas Woolfolk came into the ninth to earn his fifth save of the season. Woolfolk had to battle with the leadoff batter in the ninth, but eventually won the 12-pitch at-bat.

Vanderbilt (12-7, 0-1) sent Kyle Wright to the mound who pitched seven innings, giving up six hits and the lone run. Wright walked two and struck out four batters while earning his third loss of the year.