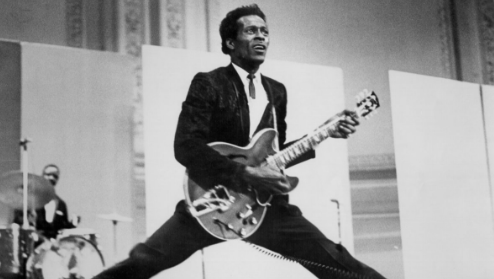 Chuck Berry is dead at the age of 90.

Chuck Berry, the singer and rock and roll legend, is dead at the age of 90, according to reports.

How did Chuck Berry die?

St. Charles County Police confirmed they responded to a ‘medical emergency’ at his home near St. Louis, Missouri, at 12.40pm on Saturday, according to reports.

He is the noted singer of hits including Maybellene, Roll Over Beethoven and Johnny B. Goode.

Born on October 18, 1926, in St. Louis, Missouri, Chuck Berry had early exposure to music at school and church,” according to Biography.com. “As a teen, he was sent to prison for three years for armed robbery. He began producing hits in the 1950s, including 1958’s “Johnny B. Goode,” and had his first No. 1 hit in 1972 with “My Ding-a-Ling.” With his clever lyrics and distinctive sounds, Berry became one of the most influential figures in the history of rock music. Berry died on March 18, 2017 at the age of 90.”

Former President Bill Clinton called Berry in 200 “one of the 20th Century’s most influential musicians,” according to NBC News.