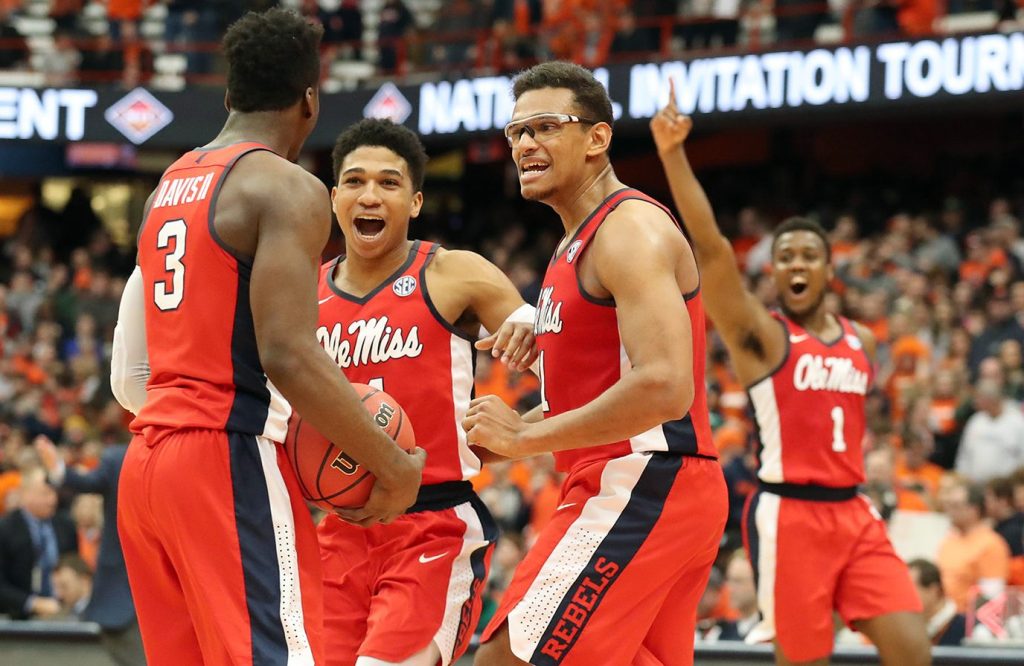 Ole Miss' Sebastian Saiz (11), Breein Tyree (4) and Terence Davis (3) celebrate following the Rebels' 85-80 win over Syracuse in the second round of the NIT on Saturday at the Carrier Dome in Syracuse, N.Y. (Joshua McCoy/Ole Miss Athletics)

SYRACUSE, N.Y. — Andy Kennedy knew his team had to knock down its fair share of shots over the size and length of one of college basketball’s trademark defenses Saturday.

Ole Miss’ coach watched Terence Davis and the rest of his guards sink one after the other to help the Rebels move one step closer to a return trip to New York.

Ole Miss knocked down nearly half of its shots and got out of the Carrier Dome with an 85-80 win over top-seeded Syracuse in the National Invitation Tournament. Ole Miss, the fifth seed in its region of the bracket, advanced to host a quarterfinal matchup against either No. 7 Belmont or No. 6 Georgia Tech on Tuesday.

Another win will send the Rebels (22-13) to Madison Square Garden, where the tournament shifts for the semifinal and championship games.

“Quality effort for us,” Kennedy said. “It goes without saying Syracuse is one of the most storied programs in all of college basketball. They’ve beaten some really, really good teams that are advancing in the NCAA Tournament, so we knew coming in we were going to have to play well and thankfully we did.”

Davis led all scorers with 30 points on 8 of 11 shooting and knocked down a career-high six 3-pointers. He had 19 of his points in the second half, combining with Deandre Burnett (19 points) and Cullen Neal (15) to carry the Rebels with Syracuse’s rangy 2-3 zone affecting Sebastian Saiz, who still collected his 22nd double-double with 12 rebounds and 10 points but finished just 4 of 13 from the field with the Orange (19-15) outscoring Ole Miss 34-22 in the paint.

“That was probably the first time (I’ve been in a zone like that),” said Davis, who finished three points shy of the career-high he set against LSU earlier this season. “The LSU game was similar, but I don’t think I’ve hit six 3s in a game.”

The backcourt trio combined to shoot nearly 69 percent from the floor (22 of 32) as Ole Miss shot 46.8 percent from the field and made 15 3s for the first time since 2013 for a 46.9-percent clip from deep. Syracuse made 5 of 7 3s at one point and never allowed Ole Miss’ lead to grow to more than seven in the second half, but the Rebels made 10 of their final 16 shots from the beyond the arc, including one from Burnett just before the shot clock expired that put Ole Miss ahead 82-78 with 1:22 left.

Burnett also dished out a career-high nine assists for the Rebels, who made 12 of their 15 free throws and three of their last four to ice the victory. Ole Miss finished with 17 assists on 29 baskets and outrebounded the Orange 22-15 in the second half to offset 15 turnovers.

“Against this zone, you’re going to have to pass the ball and have good ball movement,” Kennedy said. “We had 29 made field goals off 17 assists, which tells me our ball movement was good. We were getting guys rhythm shots, not a lot off the bounce.

“We made quality shots.”

Andrew White and Taurean Thompson each had 18 points for Syracuse, which lost for just the third time this season when leading at the half. Tyus Battle had 17 points while Tyler Lydon finished with 15 points and a game-high 14 boards, but Lydon had just one point and five rebounds in the second half after tormenting the Rebels on the interior early.

Ole Miss hit nearly 44 percent (13 of 30) of its shots in the first half but couldn’t keep Lydon off the glass. The Orange’s 6-foot-9 stretch forward had nine rebounds with six of those boards coming on the offensive end to help Syracuse score 10 second-chance points in the first 20 minutes.

“Pretty much box him out and don’t let him catch and shoot,” Davis said of the Rebels’ second-half adjustments against Lydon.

Lydon and Frank Howard, who hit Syracuse’s first 3 with 6:30 left before the half, put together their own 12-0 run to give Syracuse its biggest lead at 34-25. Ole Miss didn’t help itself with nine turnovers but chipped away to cut the deficit to 38-36 at the break and continued to pour in shots over the top of the Orange.

“This was a microcosm of our season,” Syracuse coach Jim Boeheim said. “We fight hard. We battle. But when shots aren’t going, we aren’t able to stop the other teams’ shooters. We haven’t done that all year.”