Vanderbilt uses three HRs to even series with No. 18 Ole Miss 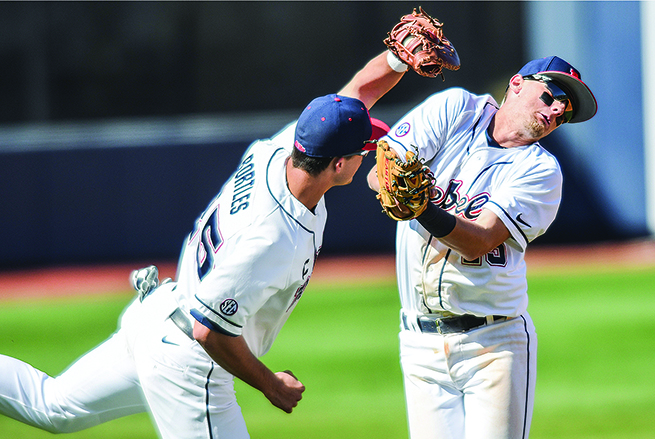 Runs have been hard to come by for Ole Miss opponents over the past week, that was not an issue for Vanderbilt on Saturday. The Commodores defeated the No. 18 Rebels 6-2 to even the weekend series at Oxford-University Stadium.

The consecutive scoreless innings streak for Ole Miss (13-6, 1-1 Southeastern Conference) pitching ended at 48 when Vanderbilt (13-7, 1-1) scored three runs in the fourth inning off of back-to-back home runs by Commodore third baseman Will Toffey and left fielder Stephen Scott. Toffey’s was a two-run shot while Scott followed with a solo homer. Center fielder Jeren Kendall hit Vanderbilt’s third home run of the day in the eighth inning.

Rebel starter Brady Feigl struggled throughout his 5.1 innings of work, getting behind batters consistently, earning his second loss on the season. A one-out double by Scott in the sixth inning ended Feigl’s day. The right-hander gave up five hits and four runs, all earned, while walking two and striking out six Vanderbilt batters

Andy Pagnozzi worked 1.2 innings, giving up 1 on off two hits. Freshman Houston Roth made his sixth appearance of the season, pitching 1.1 innings and giving up two hits and a home run.  Connor Green pitched the ninth.

“Proud of the way (Feigl) hung in there, but today didn’t attack the strike zone,” Ole Miss head coach Mike Bianco said. “We talked about, again, to these guys that you have to get the leadoff guy. The disappointing thing to me is we weren’t in better counts earlier to make it a little easier on ourselves.”

The best chance for Ole Miss to get back in the game came in the home half of the sixth when Vanderbilt led 3-1 at the time. After Will Golsan and Ryan Olenek managed to get on with zero outs, Tate Blackman hit a single into left field. Third base coach Mike Clement sent Golasn, who was dead to rights at home by the throw from Scott and then Olenek was tagged out trying to steal third. Colby Bortles then grounded out to second baseman Ethan Paul to snuff out a golden scoring opportunity.

“It’s a tough one,” Bianco said of the play. “Obviously, it’s a tough call for coach Clement. You look at it from where (Scott) fielded it, and even though it got to him in a hurry, it was way back there. Terrific throw by a guy who doesn’t play regularly there. Then base running error by us to really squelch out the rally. When you having trouble chaining it together you can’t make mistakes like that.”

Vanderbilt starter Patrick Raby went six innings, giving up two runs off four hits and struck out three. Golsan finished the day 2 for 4, while Thomas Dillard was 1 for 3 and had an RBI. Shortstop Grae Kessinger was responsible for the other RBI but went 0 for 3 at the plate.