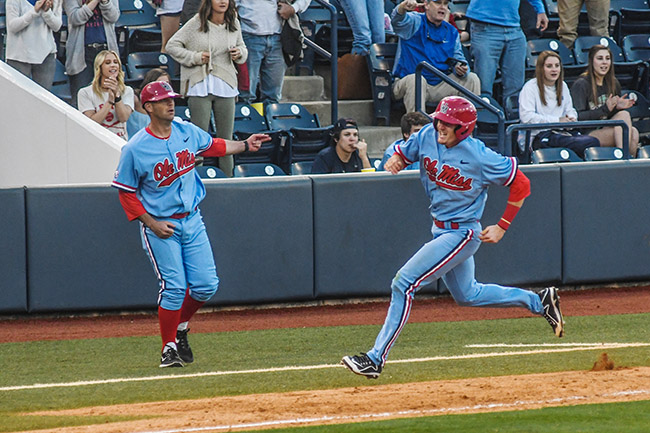 In a game that had more ups and downs, twist and turns than a road in San Francisco, the No. 18 Ole Miss baseball team showed toughness and rediscovered an offense that had been hiding over the past couple weeks.

The Rebels defeated Vanderbilt 10-8 on Sunday at Oxford-University Stadium to claim the series in the opening weekend of Southeastern Conference play. It was a game that saw four lead changes and took over four hours to complete and took on an all-hands on deck mentality in the final stages.

“We dressed 15 position players and all 15 played,” Ole Miss head coach Mike Bianco said afterwards. “It was obviously nice to win, but to win this way. To win where we didn’t pitch well and certainly we needed the offense.”

Trailing 8-7 in the eighth inning, the Rebels (14-6, 2-1 SEC) offense scored three runs to take the lead for good. After a solo home run by Colby Bortles, pinch-hitter Chase Cockrell doubled down the right field line to score Will Golsan who had walked earlier for the go-ahead run. Nick Fortes singled later in the inning to score Cockrell for an insurance run.

After being unable to score runs consistently the past week, the Rebels scored eight in the final four innings on Sunday.

“We had to score eventually,” Bortles said. “(Ole Miss batting coach Mike) Clement said it best that the last two games we’d been putting together good (at-bats). We had runners on and were just waiting for that big hit. We just kept at it.”

Bortles finished 3-for-2 with two RBIs while Golsan was 4-for-2 at the plate and had one RBI. Friday’s hero, Tim Rowe also went 2-for-4 and and had a solo home run in the bottom of the seventh.

It took every player available on the bench to piece 10 runs together, it was also a pitch-by-committee day for the pitching staff as well, sending five arms to the mound. Freshman Will Ethridge earned his first SEC start of his career and finished with mixed results. The right hander only lasted 3.1 innings, giving up five runs on six hits. He walked two and struck out five. Greer Holston followed with 2.1 innings of work, allowing one run on two hits and striking out three Commodore batters. Ryan Rolison rounded out the trio of freshman arms to see action on Sunday.

Closer Dallas Woolfolk earned his first win of the season, pitching the final two innings and keeping Vanderbilt off the board.

“Freshman have to play,” Bianco said of his pitchers. “They’re three really good guys that compete. Greer really had great stuff early on and was really amped up. Ryan got us a big strikeout. Those guys are going win a lot of baseball games for us.”

It was a freshman getting the start for Vanderbilt (13-8, 1-2) as Drake Fellows took the bump for the Commodores. Fellows lasted 4.1 innings and Ole Miss batters knocked him around for three runs on five hits and three walks but struck out six times against him.

Ole Miss hits the road for a four-game road trip, starting Tuesday when they travel to Memphis and take on the Tigers at AutoZone Park (6:30 p.m.) then heading to Lexington, Kentucky for a Thursday-Saturday SEC series with the Wildcats.