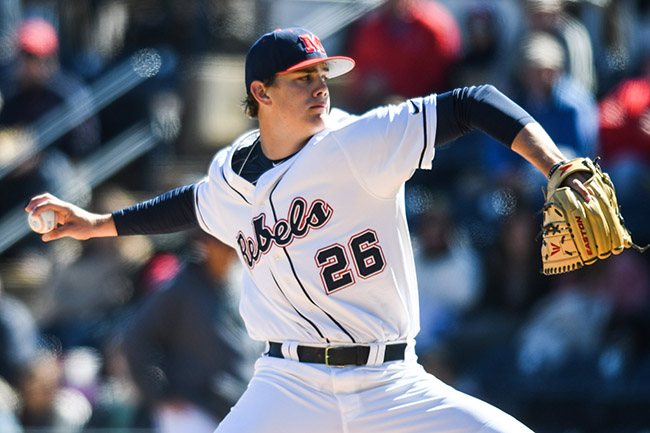 Ole Miss’ sophomore right-hander has fully recovered from a forearm strain and will pitch for the first time in nearly three weeks Thursday when the 11th-ranked Rebels open their series at Kentucky, head coach Mike Bianco said. McArthur, Ole Miss’ usual Saturday starter, has missed his last two starts, the latter as a precaution to allow the injury to completely heal.

McArthur threw a bullpen Monday and “looked great,” Bianco said, making his coach comfortable enough to put him back in the rotation. McArthur last pitched March 4 when he allowed two hits and three runs — all unearned — in five innings in the Rebels’ 5-1 loss to Texas Tech in the Shriners College Classic.

“We wanted to wait one more week until he felt nothing in the forearm,” Bianco said. “At the end of last week, he started feeling good, but he hadn’t even spun any breaking balls yet. Started throwing breaking balls over the weekend, threw a bullpen today and said he feels as good as he’s ever felt in his life.”

McArthur’s return will further bolster what’s been one of the country’s best rotations of late with Ole Miss’ starters combining to throw more than 52 scoreless innings before Vanderbilt’s 6-2 win on Saturday. McArthur has posted a 1.76 earned run average in three starts with 20 strikeouts and just seven hits allowed in 15 1/3 innings.

David Parkinson (4-1, 2.03 ERA) will stay in his usual Friday spot. Brady Fiegl (2-2, 4.45) has rounded out the rotation the first five weekends, but Bianco said he’s yet to decide on a starter for Saturday’s series finale.

Senior right-hander Sean Johnson will get his first start of the season when the Rebels (14-6, 2-1 Southeastern Conference) travel to Memphis on Tuesday at 6:30 p.m.

Johnson has worked just one inning this season while recovering from a fractured bone he suffered in his hand after punching a wall in early February. Johnson made 10 appearances with nine starts for the Rebels last season but struggled a year removed from Tommy John surgery, allowing 38 hits in 32 2/3 innings with a 4.96 ERA.

Bianco attributed some of those struggles to rushing Johnson back after that kind of surgery, but Johnson is healthy this season and showed that with two strikeouts in a scoreless inning of relief in Ole Miss’ 5-0 win over Nicholls in Biloxi last week.

“I think he looked terrific down at Biloxi,” Bianco said. “He’s ready for this, especially since we threw a lot of those midweek guys on the weekend out of a relief role. I think it’s a perfect time to get Sean a good chance to start fresh rather than be out of the bullpen and leave some of those other guys in the bullpen this week.”

Ryan Olenek didn’t break any bones in his left hand over the weekend and “should be fine,” Bianco said.

The sophomore outfielder took a pitch to the hand on Saturday and Sunday against Vanderbilt. Olenek underwent an X-ray on Monday that came back negative.

Olenek is hitting .290 with four doubles and eight RBIs. He’s made one error as the Rebels’ everyday center fielder.