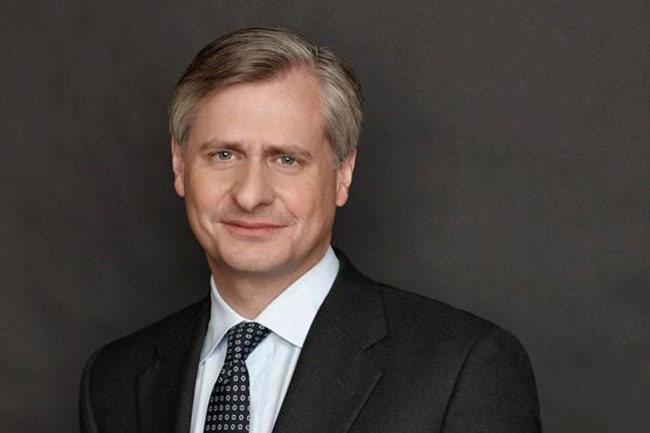 Pulitzer-prize winning author Jon Meacham will give the UM Commencement address on May 13.

Pulitzer Prize-winning author, presidential historian and one of America’s most prominent public intellectuals Jon Meacham will deliver the University of Mississippi’s 164th Commencement address May 13 in the Grove.

Meacham, a former editor of Newsweek and a contributor to Time and The New York Times Book Review, speaks to graduates and their families at 9 a.m.

Also a regular guest on MSNBC’s “Morning Joe,” he is respected for his great depth of knowledge on current affairs, politics and religion. He possesses a rich understanding of the way issues impact American lives and also why each event’s historical context is important.

Having Meacham on campus for such an important event in the lives of students and their families is a “tremendous honor” for the university, Chancellor Jeffrey S. Vitter said.

“It is an amazing opportunity for our graduating students to hear from a person of his caliber – a highly accomplished, prize-winning author and renowned presidential historian,” Vitter said. “Mr. Meacham joins a long list of distinguished Commencement speakers who have graced our flagship university with their insight and knowledge over the years. We look forward to welcoming him to Ole Miss and Oxford.”

He has written multiple New York Times bestsellers and won the Pulitzer Prize in 2009 for “American Lion: Andrew Jackson in the White House” (Random House, 2008). His most recent presidential biography, “Destiny and Power: The American Odyssey of George Herbert Walker Bush” (Random House, 2015), debuted at No. 1 on the New York Times bestsellers list.

Meacham has also written other national bestsellers on Thomas Jefferson, the relationship between President Franklin D. Roosevelt and British Prime Minister Winston Churchill, and on the Founding Fathers and the role of their relationships with God during the creation of the nation. He is working on a biography of James and Dolly Madison.

“The Long View” column in The New York Times Book Review, which “looks back at books that speak to our current historical moment” and being a contributing editor at Time keep Meacham busy these days. He also was Newsweek’s managing editor from 1998 to 2006 and editor from 2006 to 2010. He is “one of the most influential editors in the news magazine business,” according to The New York Times.

He appeared on Ken Burns’ documentary series “The Roosevelts: An Intimate History,” and Fox News Channel aired an hourlong special on Meacham’s “Destiny and Power” in 2015. He has appeared on various other current affairs TV programs and news shows.

The World Economic Forum named Meacham a “Global Leader for Tomorrow,” and he is a member of the Council on Foreign Relations, a fellow of the Society of American Historians and chair of the National Advisory Board of the John C. Danforth Center on Religion and Politics at Washington University.

“Commencement is a significant event for our students that commemorates their accomplishments and the development that they have experienced while at our institution,” Wilkin said. “I am pleased that Jon Meacham will be with us to celebrate this occasion and share his perspectives and insights on this significant day.”