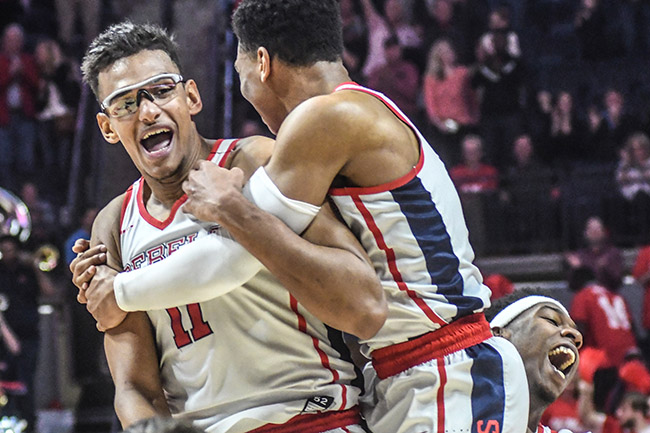 Like every other Division I college basketball player, Sebastian Saiz wanted to end his season and his career in the NCAA Tournament.

But the postseason’s second-tier tournament has given Saiz one more game in front of the home fans. Add the possibility of playing at Madison Square Garden before it’s all over for one of the best bigs in Ole Miss history, and it’s making for not-so-small consolation.

“Playing at home is always good,” Saiz said. “It’s finally going to be my last one, so I’m excited for it.”

Win or lose, Ole Miss will play at The Pavilion for the final time this season Tuesday against Georgia Tech in the quarterfinals of the National Invitation Tournament (8 p.m., ESPN2). The fifth-seeded Rebels beat Monmouth in the first round before upsetting top-seeded Syracuse on Saturday while Georgia Tech, a 6 seed, got past Indiana and Belmont in its first two tournament games, leaving Ole Miss to host tonight’s game as the higher seed.

A win Tuesday would send the Rebels (22-13) back to New York next week to play in the semifinals at the Garden, which would ensure Saiz of finishing his career at a place he’s dreamed of playing since he was a youngster growing up in Spain. The tournament semifinals will be played March 28 with the championship game set for March 30.

“That’s the mecca of basketball in the world,” Saiz said. “Everybody wants to play there as a basketball guy. Doesn’t matter if it’s high school, college, professional basketball — somewhere else or in the NBA — you all want to play in the Madison (Square Garden).

“Once you get those two big wins, it’s just so close that you start thinking about it.”

Saiz has been one of country’s most productive big men regardless of where he’s playing. The 6-foot-9, 240-pound senior forward is the only player in the Southeastern Conference averaging a double-double (15 points, 11.3 rebounds) while his 22 double-doubles rank fifth nationally. The school’s second all-time leading rebounder, Saiz needs just seven more boards to become the seventh player in SEC history to tally 1,000 points, 1,000 rebounds and 100 blocks in a career.

He’ll get one last chance to add to those numbers at The Pavilion, where he’s averaging nearly 16 points.

“I’ve never had a postseason game here,” Saiz said. “From what I’ve heard, there’s a lot of people coming. It’s going to be a lot of fun.”

Syracuse’s length on the interior of its 2-3 zone bothered Saiz, who still managed to pull down 12 rebounds and score 10 points in Ole Miss’ 85-80 win despite shooting just 4 of 13 from the field. Saiz said the team was still waiting on head coach Andy Kennedy to return from a recruiting trip Monday afternoon before breaking down film on Georgia Tech (19-15), but he caught the Yellow Jackets’ 71-57 win over Belmont on television Sunday and noticed a more even matchup inside with Tech’s Ben Lammers, who’s averaging 14.2 points and 9.4 boards.

“He’s supposed to be a really good shot blocker, but he’s coming from the weak side and there is nobody else helping him inside,” Saiz said. “I see that they don’t double in the post, so that’s going to be better for me. I’m just ready to take on the challenge as always.”

Saiz said Georgia Tech will go back and forth from a 1-3-1 zone to a 2-3 matchup zone similar to what Syracuse ran, once again making the kind of ball movement Ole Miss displayed against the Orange important. Ole Miss had 17 assists on 29 made field goals and knocked down a season-high 15 3-pointers to offset Saiz’s struggles.

With help from Saiz, the Rebels will try to improve to 14-5 at home and give their big man the next best thing to the NCAA Tournament experience.

“To keep playing basketball is always fun,” Saiz said. “I’ve never played in the Madison Square Garden, and an NIT Final Four, it’s a big deal if we make it. We’ll know (Tuesday), but if we make it, it’s going to be a great note to get out of here.”