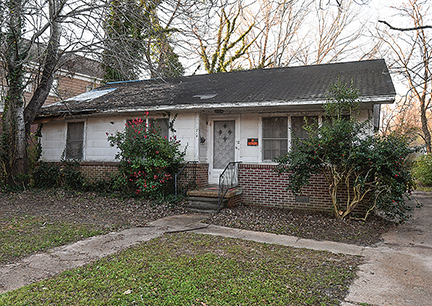 Bruce Newman A house, located at 714 University Avenue, has been approved for demolition by the Historic Preservation Commission.

The Historic Preservation Commission approved the demolition of a dilapidated home at the request of the owner and city officials, who claim the house poses a health and safety concern.

The home, owned by Rex Brunt, is located at 714 University Ave. It was built in 1955 and is historically noncontributing.

The house has been uninhabited for many years since Brunt purchased it from the prior owner.

On Monday, the commission granted Brunt’s Certificate of Appropriateness to demolish the house and landscape the lot.

City ordinance allows for demolition of a home inside the historic district if it meets certain criteria, including being in such a state of disrepair that it becomes a health and safety issue. However, the owner must present either plans for a house to replace the one being torn down, or a landscaping plan. If a landscaping plan is submitted, the owner cannot rebuild for three years. The ordinance was put into place a few years ago to discourage developers from buying old homes, tearing them down, then reselling the lot.

City planners have discussed changing the ordinance to a lesser time period or ruling on a case-by-case basis, although no ordinance change has yet to come before the Oxford Board of Aldermen.

Brunt, represented by attorney Jay Hughes, who is also Oxford’s representative in the Mississippi House of Representatives, said he plans on building his “forever home” on the lot eventually, but could not get the plans drawn up by Monday’s meeting and the city’s request to remove the house as soon as possible.

UM Communiversity Lunch and Learns on tap for Spring