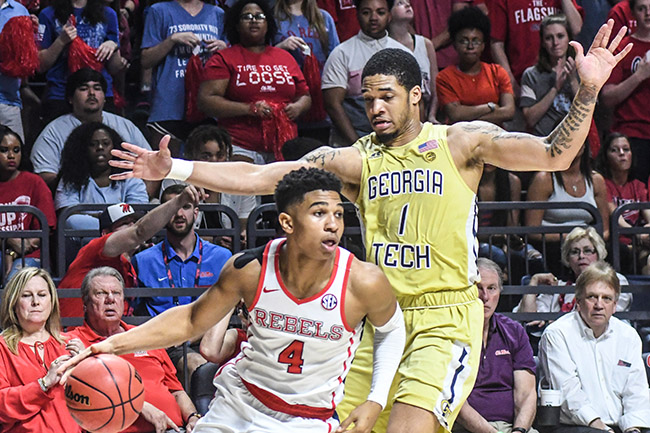 There won’t be a return trip to New York for Ole Miss.

The Rebels were ousted from the National Invitation Tournament with a 74-66 quarterfinal loss to Georgia Tech on Tuesday at The Pavilion. Sebastian Saiz had his 23rd double-double of the season with 19 points and 15 rebounds in the final game of his career while Terence Davis added 15 points, but the hot-shooting Yellow Jackets were too much for the Rebels, who came up a win short of their third NIT Final Four appearance under head coach Andy Kennedy.

Georgia Tech (20-15), in its first year under former Memphis coach Josh Pastner, will get either Cal State Bakersfield or UT Arlington in the semifinals March 28 at Madison Square Garden in New York.

Ole Miss (22-14) trailed by as many as 15 and was still down double digits with 6:45 remaining, but the Rebels cut it to four a couple of times, the last coming on a thunderous dunk from Davis to make it 68-64 with 1:40 left. But Ole Miss missed three of its final four shots while the Yellow Jackets hit their last two to put it away.

“We had opportunities,” Kennedy said. “We had that thing down to four, missed a couple of point-blank looks and then at the end it was disappointing we couldn’t get a shot and turned it over a couple times down the stretch.

Georgia Tech’s Josh Okogie led all scorers with 26 points. Ben Lammers added 20 points and eight blocks while Quinton Stephens added 10 points for the Yellow Jackets, who shot 51.9 percent (27 of 52) from the field with all but three of their baskets coming from 2-point range.

A game after knocking down nearly half its shots in its second-round win at Syracuse, hitting shots was a problem all night for Ole Miss against Georgia Tech’s switching zone defenses. Leading scorer Deandre Burnett finished 2 of 15 from the field, Breein Tyree was just 2 of 8 and Rasheed Brooks missed the only two shots he took against the Atlantic Coast Conference’s top field-goal percentage defense.

Cullen Neal (13) was the only other Rebel to finish in double figures. Ole Miss made just 39.7 percent of its shots and 21.4 percent (6 of 28) of its 3-pointers while committing 13 turnovers.

“We’ve hung our hat on defense,” Pastner said. “We’ve taken great pride in that. … The players and the execution, we do a great job getting deflections and having our hands real active. It allows us to maybe give some teams some problems on the offensive end.”

Ole Miss forced Georgia Tech into 15 turnovers, but the Rebels scored just 11 points off of them compared to Georgia Tech’s 20. Ole Miss rarely got to the charity stripe, attempting a season-low eight free throws.

“I thought the zone made us settle a little bit, and some of it’s fool’s gold because we made those shots against Syracuse,” Kennedy said. “We made 15 3s and we kind of fall in love with it, and the guys that were making them a few days ago were not making them tonight.”

One thing Kennedy didn’t have a gripe about was the turnout for the Rebels’ lone home game of the postseason, which drew a crowd of 9,091. It’s the kind of support Kennedy hopes his team continues to earn as it moves into its second full year in The Pavilion.

“People who say Ole Miss doesn’t care about basketball are crazy,” Kennedy said. “We’ve just got to get them a winner. Got to get them excited. I think we did that with our performance at Monmouth and at Syracuse. Our fans responded and I want to thank them for that, but we just did not play well enough to advance.”