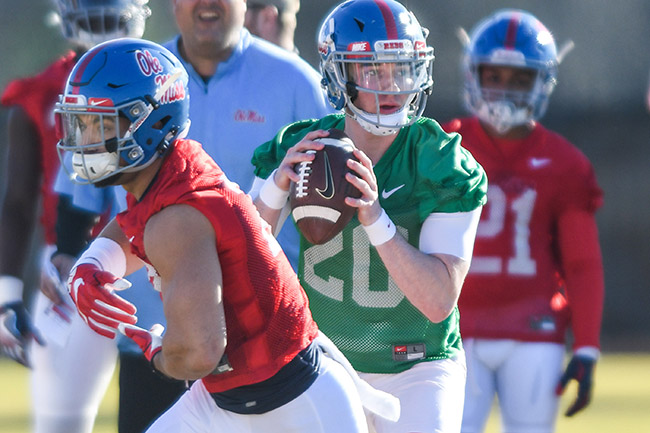 Shortly after Ole Miss announced last month it was banning itself from a bowl game next season as part of the sanctions stemming from the NCAA’s investigation into the program, running back Jordan Wilkins took to Facebook to post a message of unity, ending it with, “We’re coming whether you’re with us or not. Are you ready?”

It was out of character for the soft-spoken Wilkins but a rare move he felt was his place as a rising senior.

“I try to stay away from social media as much as I can, but at that moment, I felt like I just needed to step up and tell everybody how the team kind of felt and that we’re not going to shy away from anything,” Wilkins said.

The message is a common one with the rest of Ole Miss’ players, some of whom Tuesday spoke publicly for the first time since the ban was announced. Rising junior guard Javon Patterson said he was “devasted” when head coach Hugh Freeze gathered the team to break the news around 3 p.m. on Feb. 22.

“We had no idea,” Patterson said.

But Patterson took it as a good sign when everybody was accounted for at a 6 a.m. workout the next day. He recalled the energy being high and some players checking on the morale of others at the same position.

“Everybody just showed up ready to roll,” Patterson said.

Defensive end Marquis Haynes said players have moved on from a situation that was out of their control. Haynes, who’s working to add 10 pounds to his 230-pound frame, put off the NFL to return for his senior season and said he hopes to use his final year to improve his stock for next year’s draft.

“We’re just keeping things positive, all the energy,” Haynes said. “No frowns. None of that. We’re all here as a family, and we’re going to keep moving forward.”

Wilkins is back at practice after missing all of last season after an academic credits snafu cost him his junior season. Getting his eligibility back is more than enough motivation for the rising senior.

“The bowl ban, it does suck, but compared to what I went through before that, it’s nothing,” Wilkins said. “I kind of just brushed that off and really just helped my teammates get over that. I’m just excited to go out and play 12 more games with people I love and build relationships with them.”

It’s been a familiar rallying cry for a team that isn’t eligible for any kind of championship next season. Patterson said the ban is no longer a talking point among players.

They’re focused more on what they can control.

“Just go out there and play every game like it’s your last,” Patterson said. “We have 12 opportunities, and those opportunities still have SEC teams in front of us with Alabama, Auburn, LSU, Arkansas, all those teams. We have to play them just like they have to play us.”