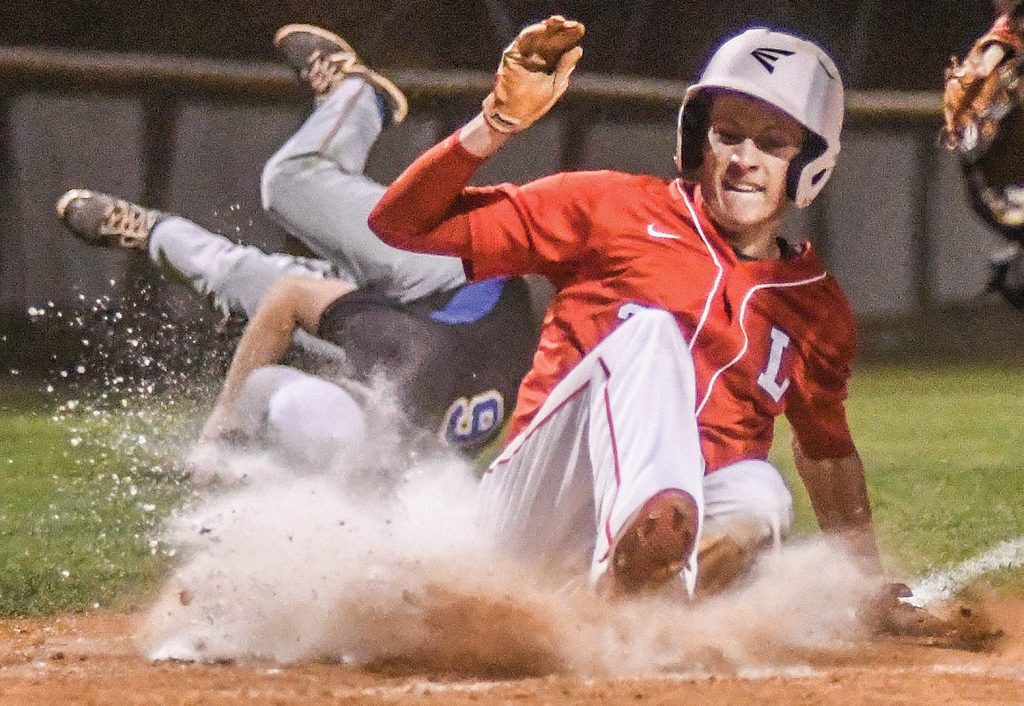 Lafayette’s Ben Harper scores against Oxford at W.V. Brewer Field in Oxford on Thursday, March 23, 2017. The Commodores won 4-3 in eight innings for their first win over their crosstown rival since March 2014. (Bruce Newman)

It took getting a lead, then losing it. It took extra innings and a three-run rally, but the Lafayette baseball team achieved something that had not been accomplished in three years. The Commodores scored three runs in the eighth inning and defeated Oxford 4-3 at Lafayette High School on Thursday night.

It was the first time since March 18, 2014 that Lafayette has claimed a victory over their crosstown rival.

Runs were at a premium as Oxford starter Tyler Smith and Lafayette’s Luke Gossett combined for 11 innings of one-run baseball. Will Ard got the start for the Commodores (7-8-1) but lasted only 1 1/3 innings before giving way for Gossett in the second inning.

“It was good defensive game,” Lafayette head coach Greg Lewis said. “(Smith) did a great job on the mound all night and (Oxford) did a great job defensively. … I was reading (Ard’s) body language and I told him, ‘I know you’re not done, but I want a guy that wants the ball right back on the mound.’ I know he’ll be that guy and he has been, but today he wasn’t.”

Oxford (13-2) found itself in a 1-0 hole midway through after the Commodores scored the first run of the game in the bottom of the fourth inning. Crawford reached second base on a throwing error by Oxford shortstop Drew Bianco then stole third during Ard’s at-bat. Ard would score Crawford with an RBI off a fielder’s choice to give Lafayette the early advantage.

The Chargers would knot the game at 1-all two innings later. Right fielder Clark Stovall hit a two-out triple and would score when Lafayette outfielder Xavier Martin committed an error, dropping a sure third out. Oxford took their first lead of the game in the top of the eighth inning, scoring two more runs and giving themselves a 3-1 advantage. The Commodores committed their second error of the game in the eighth when right fielder Quincey Twilley dropped a fly ball.

“That’s what we’ve been struggling with the whole time. Usually when we commit an error, we give up six (runs),” Lewis said. “Tonight, we dropped two more fly balls and overcome it.”

Smith gave Oxford seven innings and turned the ball over to John Reece McClure for the chance to earn his fourth win of the season. Things did not turn out well for McClure, who gave up the three runs. Lafayette’s rally started with McClure walking the leadoff batter, Ben Harper, who was pinch hitting for Dillon Woods. McClure then gave up back-to-back hits to Corey Taylor and Gossett. Gossett hit an RBI double to score Harper. Lafayette shortstop John Tate Roberts then hit into an RBI groundout to tie the game, scoring Taylor.

It was the pitching duo of Crawford and Gossett who came through as Crawford hit a fly ball to right field, scoring Gossett for the winning run.

“I thought the first five innings we just didn’t have a good approach (at the plate),” Oxford head coach Chris Baughman said. “I think (McClure) let the situation get to him. The leadoff walk killed us to the No. 9 pinch-hitter. That really hurt that inning. He couldn’t get his curveball across to Luke, and he put a good swing on it. … Tip your hat to them. They deserved it. We deserved to win, and they just made one more big play.”

Oxford dips back into region play tonight, hosting New Hope at 7 before hosting Grove City out of Ohio on Saturday with weather permitting. Lafayette is slated to play North Pontotoc on Saturday as well if the rain holds off.