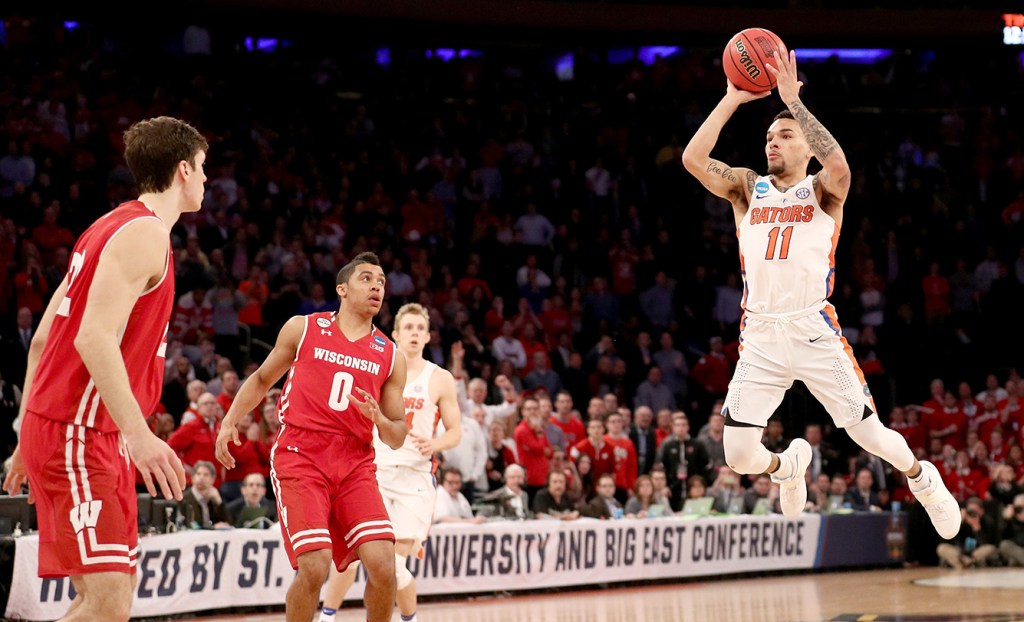 NEW YORK — Chris Chiozza went end to end and made a 3-pointer at the buzzer to give Florida a victory against Wisconsin on Friday night in the first overtime game of this NCAA Tournament.

Nigel Hayes had given the Badgers (27-10) a two-point lead with 4 seconds left on two free throws. With no timeouts left, the Gators inbounded to Chiozza and the point guard stopped right the arc and dropped in the winner for Florida (27-8).

Wisconsin’s Zak Showalter forced overtime with a leaning 3-pointer off one leg with 2.1 seconds left in regulation as the Badgers wiped out a 12-point deficit in the last 4:15.

The fourth-seeded Gators (27-8) will play South Carolina on Sunday in an all-Southeastern Conference regional final at Madison Square Garden. Florida is in the Elite Eight for the first time since 2014, and for the first time with second-year coach Mike White — the man who replaced Billy Donovan in Gainesville.

The Gamecocks (25-10) were in control from the middle of the first half on, mixing defenses and hustling all over the Madison Square Garden court to advance to the Elite Eight for the first time.

South Carolina will meet the winner of the Wisconsin-Florida game on Sunday with a trip to the Final Four at stake.

DJ Dozier and Chris Silva had 12 points each and Duane Notice added 11 for the Gamecocks.

MEMPHIS — De’Aaron Fox scored a career-high 39 points as the Kentucky Wildcats beat UCLA in a showdown between two of college basketball’s goliaths for a spot in the South Regional final.

The only No. 2 seed to survive and advance, the Wildcats (32-5) won their 14th straight game. Now the NCAA’s winningest program will play another of basketball’s titans Sunday in top-seeded North Carolina with a trip to yet another Final Four on the line.

The third-seeded Bruins (31-5) still have the most national titles. Yet they leave their third Sweet 16 under coach Steve Alford short of the Elite Eight.

Fans lustily booed Kentucky coach John Calipari in his first game in Memphis since leaving in April 2009 for the Wildcats. Calipari’s latest crop of talented freshmen put Kentucky into a regional final for the sixth time in seven years.

MEMPHIS — Joel Berry II scored 26 points and Justin Jackson added 24 as top-seeded North Carolina moved to the Elite Eight with a victory over Butler in the NCAA South Region.

Luke Maye recorded his first career double-double with 16 points and 12 rebounds, helping fuel a quick start for Carolina (30-7). The Tar Heels never let their lead get under double digits in the second half.

Andrew Chrabascz led the fourth-seeded Bulldogs (25-9) with 21 points and seven rebounds, while Kelan Martin finished with 16 points for Butler, which struggled shooting early and did not recover.

Carolina, which reached the Elite Eight for the 27th time, will face the winner of Friday’s second game between UCLA and Kentucky. The Tar Heels connected on 54.4 percent of their shots, while Butler was at 43.5 percent.