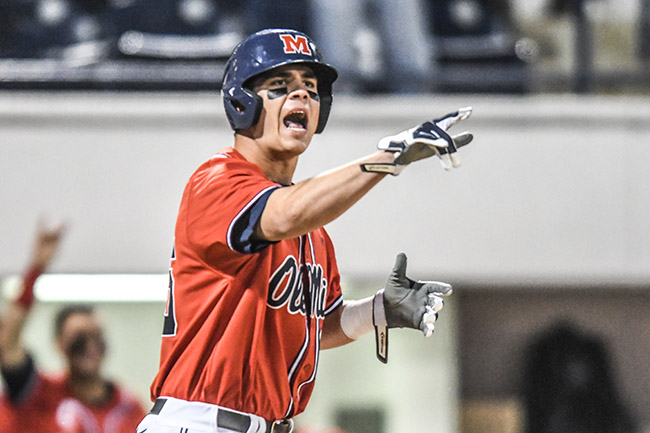 LEXINGTON, Ky. — No. 11 Ole Miss equaled No. 19 Kentucky in hits, but the Wildcats (18-7, 5-1 Southeastern Conference) got the timely hitting needed to win the series rubber match Saturday afternoon at Cliff Hagan Stadium. Each team recorded seven hits apiece, but Kentucky emerged with a 4-1 victory in Game 3 of the SEC baseball matchup.

For the third time this week, senior Colby Bortles put together a multi-hit game to lead the Ole Miss bats. Sophomore Ryan Olenek scored the Rebels’ only run to go along with a single and a stolen base. First baseman Chase Cockrell also added a hit for the fourth straight game.

On the mound, the Ole Miss bullpen assisted starter Will Ethridge (1-1) by pitching five innings and keeping the Rebels (15-9, 3-3) in the contest. Four relievers combined to allow only two unearned runs on one hit and one walk. Sophomore Connor Green pitched a season-high three scoreless innings of relief, which started with limiting the damage on a bases-loaded jam. Entering the game late, Will Stokes retired all four hitters he faced in 1 1/3 innings of work.

Justin Lewis (4-1) allowed one run on seven hits to earn the victory for Kentucky. Left fielder Zach Reks went 2-for-2 with one RBI, reaching base on all four plate appearances. The bottom of the order came through for the Wildcats as the final four hitters in the lineup recorded one hit apiece.

Kentucky used a pair of opposite-field hits to plate the game’s first run. With one out in the opening inning, Tristan Pompey doubled down the left field line past a diving Bortles at third. Zach Reks followed with a single to left, and Pompey beat the throw to the plate to give the Wildcats the 1-0 lead. After a mound visit from head coach Mike Bianco, Ethridge settled down by getting the next hitter to ground out before catching Reks attempting to steal third on his first move. Stepping off the rubber, the freshman tossed over to Bortles to snag the runner and end the inning.

One inning later, Ethridge recorded two quick outs before getting into trouble. A single combined with two walks loaded the bases. Following another talk with Coach Bianco, Ethridge got out of the inning unscathed by forcing a groundball to second and keeping the deficit at one run. Kentucky threatened again in the third by putting runners on first and second with no outs. However, Ethridge picked off the runner at second before his defense turned a double play behind him. Working out of another jam, Ole Miss remained down only 1-0 through the first three frames.

Kentucky loaded the bases with nobody out in the fourth, forcing Ethridge out of the game. Coming into the high-pressure situation with three Wildcats on base, Green did an exceptional job to get three straight outs. The first batter hit a deep fly to center to bring a run across, but that’s all Kentucky would get as Green prevented the big inning and kept the Rebels within striking distance.

In the top of the sixth, the Rebels plated a run to cut the deficit in half. Olenek ripped an opposite-field base hit before stealing second to get into scoring position. On a 2-2 pitch, Bortles used a good piece of hitting to go the other way into right field; the single allowed Olenek to side head first into home to beat the throw and make it a 2-1 game.

The Wildcats built their lead to three with two runs in the bottom of the seventh. Both runs were unearned due to a throwing error on a sacrifice bunt that gave Kentucky an extra out. Another sacrifice bunt moved a runner to third before a wild pitch allowed him to go home.

The Rebels will return to Swayze Field for a four-game homestand starting Tuesday against Little Rock for the annual School Day Game. First pitch is at 11 a.m.