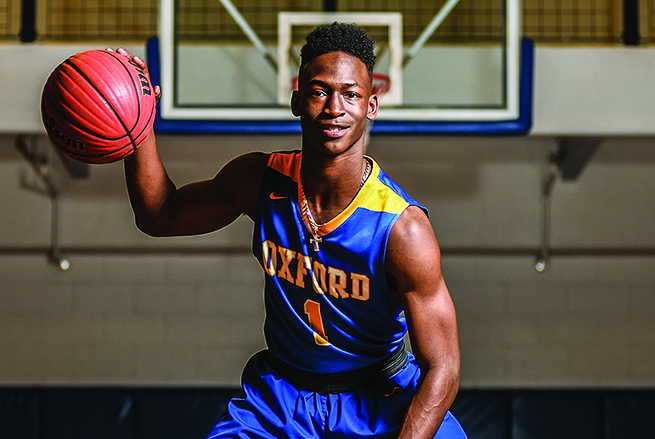 One of the best players in Oxford High’s basketball history has ended his career. Jarkel Joiner played his final game as a Charger on March 7, losing to Laurel in the semifinal round of the MHSAA Class 5A playoffs at the Mississippi Coliseum in Jackson. The goal was to get back to Jackson and make it to the ‘Big House,’ and Joiner and the Chargers accomplished that goal. They reached the Final Four for the first time in 10 years in the process, and it could not have been done without the phenomenal season of Joiner’s, earning him his third EAGLE Player of the Year award out of his four high school seasons.

Oxford lost to the eventual two-time 5A state champion Golden Tornadoes by a score of 67-65. The Chargers had their chances to reach the state championship game, but instead it is an outcome that will haunt Joiner for the foreseeable future.

“That game is going to stick with me for the rest of my life,” Joiner said. “Because I play moments back in my head where I could have impacted the game more. It’s just going to motivate me to go harder in college.”

Throughout most of the season, Joiner was leading the nation in points per game, finishing fourth with 36.5 ppg. Joiner was the Chargers’ leading scorer from his sophomore season on, averaging more than 15 points a game and increasing his average by at least 10 points each year. The scoring was not the only impressive statistic for Joiner, who finished with nearly two assists per game, 5.4 rebounds and 2.2 steals per game in his final year.

“(Joiner) played every minute of Oxford basketball this year,” Oxford head coach Drew Tyler said. “That’s what he prepared himself for. … I think we saw a high school senior playing at a college freshman level. We didn’t have a lot of offensive trips this year. He was scoring inside and outside the 3-point line. It has to do with his work ethic and his business-like approach to his senior season. It would be a great day to have another Oxford basketball player work and train like Jarkel Joiner.”

It was a banner year for Joiner, becoming the only Oxford player to score more than 2,000 points in their high school career with 2,617 and scored more than 1,200 points this season alone. He averaged 42 points a game, setting an all-time record in the Great 8 Tournament in Jefferson City, Missouri last fall. Joiner also set another scoring record in this year’s Tangle on the Trail Classic, scoring 52 points in a win over Calhoun City. Perhaps his greatest accomplishment came when he scored a career-high 58 points in the Hotbed Classic at New Albany in a win over Brighton out of Tennessee. It is now the scoring record in a single game in the 26-year history of the Hotbed Classic.

“One word, blessed,” Joiner said when summing up his four years at Oxford. “Just a blessing from God. God just built this into me, and I feel this is what I was put here to do.”
Joiner signed with California State University-Bakersfield before the season and will head out there on May 28 to enroll in summer classes and begin workouts.

Oxford
Joining Joiner on the 2017 All-Area team are teammates Terry Williams and Drew Bianco. Without this Charger trio, there would have been times where Oxford would not have recorded a single point in a game. They accounted for 2,008 of Oxford’s 2,426 points this season (82.7 percent). Williams finished behind Joiner, averaging 17.3 points per game, and pulled down three boards a game along with 4.1 assists and nearly two steals per game.

Williams was Butch to Joiner’s Sundance. If Joiner was struggling in a half or, on a rare occasion, an entire game, Williams was there to pick up the slack.

After taking a year off from basketball, Bianco returned for his junior season and provided an aspect of toughness the Chargers needed. He averaged seven points, 2.2 assists and just more than a steal a game. His biggest contribution was on the glass, pulling down 7.4 rebounds a game and finishing with a team-best 243 on the year. With Joiner and Williams graduating, Bianco will be the top returning starter for the Chargers next season.

“The constant thing with Drew, as far as the statbook, the rebounds were there every game,” Tyler said. “Defense, offense, rebounds. Then there’s the loose balls. The hustle inside the lines. Then there’s the hustle outside the lines that he brought night in, night out. … It’s about 53 points a game we’re graduating. Knowing that Drew has smoothed out his rough edges, we’re upbeat and really excited about what he does bring to the offensive end of the floor.”

Lafayette
The Commodores took a step in the right direction this season, reaching the first round of the Class 4A playoffs before being eliminated by eventual runner-up Leake Central. Jonah Matlock and Hogan Linzy represent Lafayette on this season’s All-Area team.

The junior duo of Matlock and Linzy were the two top scorers for the Commodores with Matlock being the only player to average double figures with 10.4 points per game. Linzy followed with 8.2 points. They combined for 93 of Lafayette’s 228 points this season (40.7 percent).

Linzy lead the team in rebounds, pulling down 6.6 boards a game. Matlock had a team-best 1.6 steals per game.