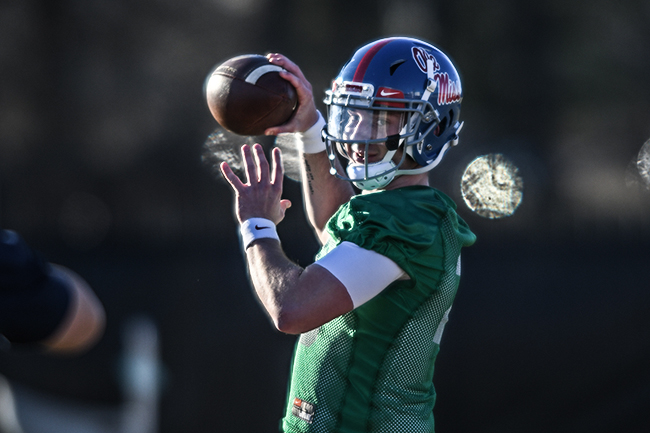 He was ready to start the play right until the moment he wasn’t.

Ole Miss quarterback Shea Patterson left his usual alignment a few feet behind center Sean Rawlings at a recent practice and walked close enough to Phil Longo where the two could hear each other, checking with his first-year offensive coordinator to make sure everything was right before calling for the snap.

It’s been that kind of spring for an offense that’s starting fresh under Longo, who’s installing the up-tempo offense that was one of the best at the Football Championship Subdivision level the last three seasons at Sam Houston State, particularly for the player at the controls. The base offense, which Longo said consists of about 25 plays, was installed in four practices with the only new wrinkles added since then being short-yardage and goal-line packages.

Still technically a freshman, Patterson has yet to be made available to the media this spring, but coaches said the rising sophomore is slowly catching on to Longo’s system as Ole Miss enters the fourth week of practices.

“When he understands exactly what’s going on, he’s really good,” head coach Hugh Freeze said. “There’s still a percentage of things he’s questioning and you can actually see it as I stand behind him, he’s hesitant to give the cadence for the snap because he’s trying to process it all because the verbage is new and all the tags are new. I think he’ll have it down by the end of our 15 practices.”

Patterson displayed the quick release and mobility that are staples of the former five-star prospect’s game a year earlier than expected once his redshirt was pulled with three games left last season after Chad Kelly’s career ended with a torn ACL. Patterson completed 55 percent of his passes for 880 yards with six touchdowns and three interceptions while rushing for 169 yards — two of those scores coming in a 29-28 win at Texas A&M in his collegiate debut to help the Rebels rally from a 15-point deficit in the fourth quarter.

Jeremiah Briscoe, Longo’s quarterback at Sam Houston State, won the Walter Payton Award last season as the top offensive player in the FCS after throwing an FCS-record 57 touchdown passes, but he was strictly a pocket passer (minus-53 yards rushing). Patterson’s ability to make plays with his feet gives Longo another element to tinker with once Patterson has the basics down.

“He’s gifted as a passer and we all know how mobile he is,” Longo said. “I think we’ve got to do a good job of making sure we utilize both of those things. Mentally, I think every day that goes by, just based on my conversations with him, he gets more and more excited every day because the light’s coming on and it’s getting brighter and brighter every day. He’s starting to realize how much I think he feels like he can do in the offense, and that’s a good thing right now.”

Teammates said they have noticed Patterson taking on more a leadership role, particularly since news came down last month that Ole Miss was self-imposing a one-year bowl ban as part of the response to the NCAA’s investigation into the program.

“As a quarterback, you have to, but he was really one of those guys,” offensive lineman Javon Patterson said. “He called us up and said, ‘Hey offense, I’m here. I’m here to stay.’ Things like that.”

Javon said the normally soft-spoken quarterback has been plenty vocal this spring, but others have picked up on it as much in his actions as his words as the Rebels try to move on from last year’s 5-7 debacle.

“He’s always up here pushing everybody and texting people, ‘Hey, I’m coming to work out,’” running back Jordan Wilkins said. “I think we’re trying to get him to become more of a vocal leader, but you can tell he’s a leader by his work ethic and by how hard he comes out prepared for practice and stuff like that every day.”