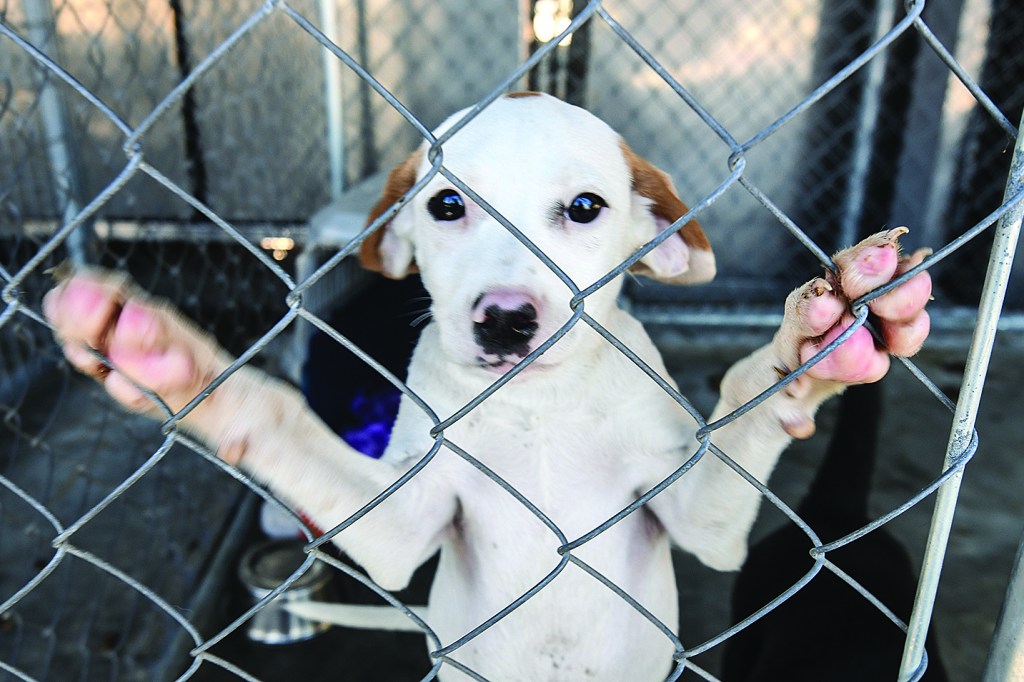 A puppy peers out of a cage at the Oxford-Lafayette Humane Society, in Oxford, Miss. on Sunday, March 26, 2017.

By way of email, the majority of Oxford-Lafayette Humane Society board members voted this weekend in support of using a large donation to open a low-cost spay and neuter clinic. However, some want the money to go to improving services and the existing shelter, causing contention among the board.

When Dr. Leslie Tubb died in 2014, he left OLHS a $630,000 donation received a year later. Board president Cyd Dunlap said she had many conversations with Tubb, who wished to see the funds used for a low-cost spay and neuter clinic; however, his will only states that the money was being left to OLHS.

Earlier this year, Dunlap and the executive board sought an attorney general’s opinion as to whether the shelter could operate a clinic since some of its funding comes from both Oxford and Lafayette County taxes. The opinion said the clinic could be opened as long as the only services it offered were spay and neutering, along with shots to prevent rabies.

The Oxford Board of Aldermen approved the shelter re-purposing a large room at the shelter for the clinic.

Former board member Katie Muldoon contacted the EAGLE after resigning from the board to express her concern about the donation being used solely for the clinic.

Muldoon said since Tubb’s will did not earmark what the funds were to be used for, the board should have been given more input on its use.

“There are many board members concerned with the allocation of such a large donation being restricted by the board president to use on a spay and neuter clinic, while transports and our current adoption program would be a much more effective and financially efficient use of the funds,” Muldoon said.

Use money for transport program

Since the shelter already offers a low-cost spay and neuter program utilizing local veterinarians, Muldoon said she believes a good portion of the money would be better used to expand the shelter’s transport program where some of the animals are transported to other shelters in the north where strict spay and neuter laws leave very few pets available for adoption.

Muldoon also raised concerns of the clinic being able to support itself, causing the donation to be “burned through” quickly and the “chaos” it may cause to the general operation of the shelter, as well as possible cross-contamination of diseases with the clinic being so close to the shelter animals.

“For the board to have had no say in the allocation of such a large amount, I find to be an abuse of power on the part of the executive board, and a denial of the rights of other board members to contribute to decisions that will affect the basic functioning of both the shelter and the OLHS mission,” Muldoon said.

Two other board members spoke on conditions of anonymity saying they agreed with many of Muldoon’s concerns, but felt they haven’t been given enough input or information and that the decisions are being made solely by the executive board.

Dunlap polls the board

Dunlap said Sunday she polled all board members this weekend through an email and eight responded in favor of the low-cost clinic but did not want to further comment on Muldoon’s claims. There are 13 members of the board, including Dunlap, with four making up the executive board.

Current board member Sam Lee said he isn’t against a low-cost clinic but feels the donation could be used partly for the clinic and then some for transports and capital projects at the clinic.

“Maybe you put $400,000 toward the clinic, then $100,000 for projects and the rest for transports and other things,” he said. “And if we need more for the clinic or capital projects, we fundraise for it.”

Mayor Pat Patterson said while the city contracts with the shelter for animal control services, internal issues are not the concern of the Board of Aldermen.

“As long as funds are properly spent, any other issues is a private matter of the shelter board,” he said.