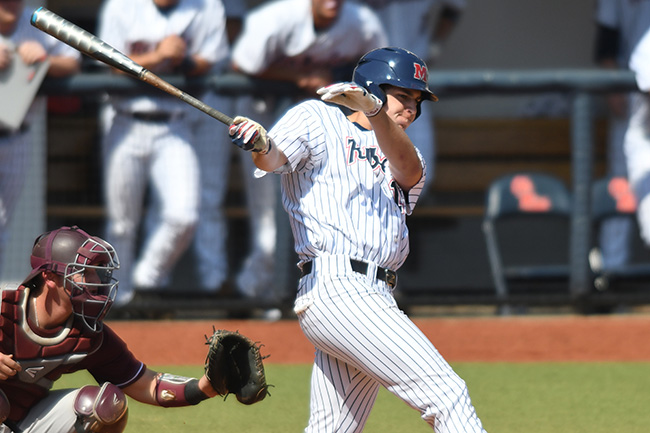 With its offense scuffling again, Ole Miss used a combination of patience and timeliness to avoid what would’ve been its worst RPI loss of the season Tuesday.

Ole Miss rallied with three runs over the final three innings and got an RBI single from Michael Fitzsimmons in the bottom of the 10th to walk off with a 5-4 win over Little Rock in the Rebels’ annual School Day game at Swayze Field.

“Proud of our guys the way they hung in there,” Ole Miss coach Mike Bianco said.

A four-run seventh by Little Rock put the Trojans ahead 4-2, but the Rebels used a single and four walks, the last two forcing in runs, to draw even in the eighth. Kyle Watson drew another walk against McKinley Moore (0-1) to start the bottom of the 10th and advanced to third on a wild pitch before Fitzsimmons, pinch hitting for pinch runner Jason Barber, lined a 2-1 fastball into left to help the Rebels notch just their second victory in their last five games.

“I was looking for fastballs,” Fitzsimmons said. “He threw me three of them, and I was trying to stay short and not do too much. Was lucky enough to get a hit. Put a good swing on it.”

Ole Miss (16-9), which began the day next to last in the Southeastern Conference in batting average, struggled to do much against a Little Rock staff that came in with a collective 4.87 earned run average. Ole Miss got on the board in the bottom of the second with Cole Zabowksi’s two-out RBI single off Ryan LeMoine, who was making his first start for the Trojans (9-16) after posting a 13.84 ERA in 10.1 innings this season.

LeMoine lasted just two innings, but the Rebels combined for just seven more hits against nine Little Rock relievers and were just 3 of 13 with runners in scoring position, the other knock coming on an RBI single from Tate Blackman to make it 2-0 in the fifth. Freshman Greer Holston, making his third start of the season, made it hold up for 5 1/3 scoreless frames, scattering three hits, striking out three and walking two to lower his ERA to 2.28 before exiting with one out and one on in the sixth after 77 pitches.

Connor Green stranded a runner at third to end the sixth but was relieved by Sean Johnson with two on and one out in the seventh. After a flyout, Johnson uncorked a wild pitch before Cale Ridling tied it with a two-run single through the left side. Zach Baker followed with a two-run homer into the bullpen in left to give Little Rock the lead.

“Holston I thought was terrific,” Bianco said. “They just put an inning together where we once again have a little trouble getting off the field.”

Oxford native Houston Roth (1-0) struck out the side in the top half of the 10th to pick up his first collegiate win before the Rebels capped their comeback.

“They let us back into the game with some walks, but that’s something we don’t do well,” said Bianco, whose team drew eight free passes. “Today we took the walks. Today we got some bunts down and gave us some opportunities. We squandered some opportunities, but we continued to give ourselves opportunities and Fitz at the end makes the most of it with a big hit at the end.”

Ole Miss will return to action Thursday for its series opener against Mississippi State at Swayze Field. First pitch is set for 7 p.m. on ESPNU.