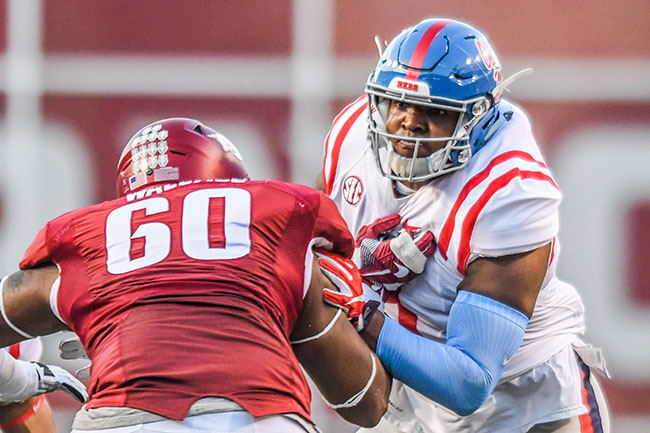 Breeland Speaks admitted he had to do some soul searching in the offseason.

Speaks’ sophomore season on the interior of Ole Miss’ defensive line fell well short of what he expected from himself. He talked confidently about taking over full-time for All-American Robert Nkemdiche after actually tallying more tackles than Nkemdiche in 2015 despite starting just two games that season, yet that kind of impact player never materialized.

Speaks, who said he wants to be anywhere from 295-300 pounds, played well below that for much of last season. The girth wasn’t there and neither was the motor that was supposed to define his game, at least not consistently.

“I’m not going to call it stress, but I just feel like I was dealing with a lot,” Speaks said. “I wasn’t focused and that was part of it. That’s pretty much where I think my body broke down having to do so much with everything going on.”

Speaks began the season as a starter but finished with just 28 tackles and one tackle for loss. The 38-21 loss to LSU in late October was the last game he started as freshman Benito Jones passed him on the depth chart.

But Speaks is starting over with new defensive coordinator Wesley McGriff and a new position coach in Freddie Roach. He doesn’t have all his weight back but said he’s going through the spring at close to 290 pounds while usually repping with the first-team defense, catching the eye of coaches and teammates with that effort that’s even more relentless than some remember.

“His motor is one like I’ve never seen before,” said guard Jordan Sims, who spends many reps engaged with Speaks in the trenches. “He comes off the ball and he just keeps going throughout the whole play. He’s explosive, he has great hands, and he pops you at the same time.”

The main focus for Speaks this spring is nailing down a technique that’s different under Roach than what former defensive line coach Chris Kiffin taught. Speaks explained he’s lining up more head up on the guard as opposed to being tilted inside toward the center while relying more on his hands to engage blockers in order to keep his head free to see what’s coming from the offense.

“I love it. I really do,” Speaks said. “Keeps everything in front of you. You keep your head out of it so you can actually see what’s going on. You can see what blocks you’re actually getting and better play out of it.”

Speaks is willing to do just about anything to help improve a defense that was the weak link in the Rebels’ 5-7 season. Ole Miss finished 100th nationally in scoring defense, 111th in total defense and — the most embarrassing stat for Speaks and his fellow defensive linemen — 120th against the run.

Head coach Hugh Freeze said it will take some time for Speaks to get caught up on the intricacies of the new defense, but he’s liked what he’s seen out of his fourth-year lineman as Speaks tries to move on from last season’s disappointment and make the kind of impact everyone’s envisioned.

“An athlete like that that’s playing as hard as he is, he’s going to make a lot of plays,” Freeze said. “I think he’s learned and he’s continued to mature. Disappointment is part of life. We talk about that all the time. It’s never just one person’s fault. It’s always a combination.