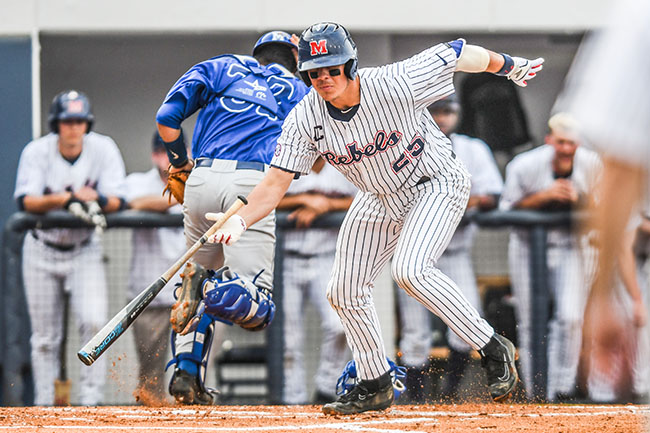 Ole Miss' Colby Bortles (25) strikes out but reaches first base on a wild pitch against Memphis at Oxford-University Stadium in Oxford, Miss. on Tuesday, February 28, 2017. After 25 games, Bortles leads the Rebels with a .286 batting average. (Bruce Newman)

Heading into the third weekend of Southeastern Conference play, Ole Miss’ offensive numbers haven’t deviated much from where they’ve been for most of the season.

The Rebels will begin their home series against in-state rival Mississippi State on Thursday (7 p.m., ESPNU) last in the league in runs, hits and RBIs while only Florida has a lower collective average than Ole Miss’ .246 clip. The Rebels on Tuesday used the help of eight walks and rallied in extras to avoid a sub-200 RPI loss against Little Rock on Michael Fitzsimmons’ walk-off single, the kind of timely hit that’s been rare for Ole Miss this season.

After scoring nine runs in their series opener at Kentucky last Thursday, the Rebels had 23 at-bats with runners on in the final two games against the Wildcats but combined for just three hits in those situations and combined to score three runs in those losses. The weekend before, Ole Miss clinched its series against Vanderbilt with a 10-8 win but still stranded 11 baserunners in that one before breaking out for eight runs over its final four at-bats.

The Rebels had nine hits against Little Rock but went 4-for-21 with runners on and just 3-for-13 with runners in scoring position, failing to add to a 1-0 lead in the fourth with runners at second and third with one out and coming up empty again in the same situation in the ninth before Fitzsimmons finally delivered in the 10th.

“Just trying to get our best (batting practice) swings off, the best BP swings when in games,” Fitzsimmons said of the offense’s approach. “If you get more of those off in the game, then you’ll win the game. More hits, more baserunners, all of that.”

The offense’s next test will come against MSU’s tandem of Konnor Pilkington, who will oppose James McArthur (1-1, 1.77 earned run average) on Thursday, and Peyton Plumlee, who’ll likely get the ball against David Parkinson (4-1, 1.93) on Friday. Freshman Ryan Rolison (3-0, 1.80) will get his first weekend start for Ole Miss on Saturday, Bianco said, while MSU has yet to announce a starter for the finale.

Pilkington, the Bulldogs’ sophomore ace, has posted a 2.75 ERA in his first six starts with 53 strikeouts in 39 1/3 innings. Plumlee is 3-1 with a 2.84 ERA. Neither the back of MSU’s rotation nor the bullpen has been as strong with the Bulldogs’ collective 4.53 ERA ranking next to last in the SEC, but Ole Miss will have to deliver that elusive knockout punch if the opportunity arises in order to get to it.

“We had opportunities to score and extend the lead (against Little Rock),” Bianco said. “Doing that opens up a lot things. One, next thing you know, they go to the bullpen, they use more pitchers, and you get more opportunities at the plate. But the other thing is I think it takes the pressure off the pitching and the defense a little bit. The pitching and defense have played with a lot of pressure on them and have handled it well.”

Still, Fitzsimmons said the Rebels’ confidence is high with MSU (16-10, 3-3) bringing the latest rendition of the rivalry to Swayze Field, a place Ole Miss has lost just three times this season despite its offensive struggles.

“We feel good. We’re ready to have them come into town,” said Fitzsimmons, who’s had two game-winning hits this season. “It’s going to be electric here at Swayze.”

Breeland Speaks moving on from disappointing season, starting over…