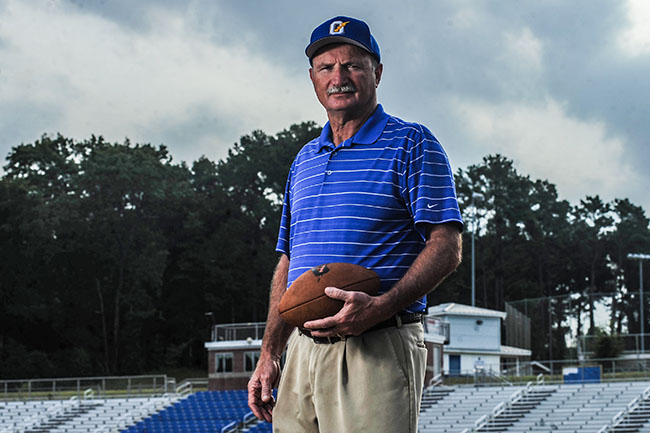 The 41-year career of Johnny Hill is getting immortalized. The long-time Oxford High football coach was named a 2017 Mississippi Association of Coaches Hall of Fame inductee on Thursday morning.

The MAC announced the 2017 class via their Twitter account. Hill will be joining four other inductees in former Madison Central head coach Bobby Hill, track and field coach Johnny Barfield, former Jefferson County High basketball coach Samuel Washington and athletic trainer Mike Wilkinson. The Hall of Fame inductees will be enshrined at a banquet held at the Hilton Hotel in Jackson on June 23 at 6 p.m.

“It’s quite an unbelievable honor, first off to even be considered (for the Hall of Fame), much less to get selected,” Hill said. “I really think that you kind of accept those kinds of things with all the people that you’ve coached with.”

Hill spent time at Marshall Academy, Tupelo, Oxford and spent last season on the New Albany staff with his son, Jake. During Hill’s time at Oxford, he helped bring the Chargers four district titles, three regional crowns, a MHSAA Class 4A north half title, three Class 5A north half titles and four state runner-up finishes, including three consecutive trips to the Class 5A state title game from 2013-15.

“I think it’s a lot to your community,” Hill said. “You have to have community support if you’re going to be successful. I would dare say that every place I’ve ever coached I’ve had really good community support. That makes all the difference in the world. …It’s quite an honor and definitely (puts a bookend on career) here in Oxford because I coached for so long.”

After retiring from Oxford, Hill decided to step back into coaching one last time, helping coach the defense at New Albany as apart of his son’s coaching staff. It appears that decision was a one-time deal as there will only be one Hill roaming the sidelines for the Bulldogs come August.

“I’m going to officially retire, retire.” Hill said. “(Jake) is working on his coaching staff and he’s adding some people and I enjoyed the heck out of working over there. Anytime you get the chance to work with one of your sons it’s really unique.”