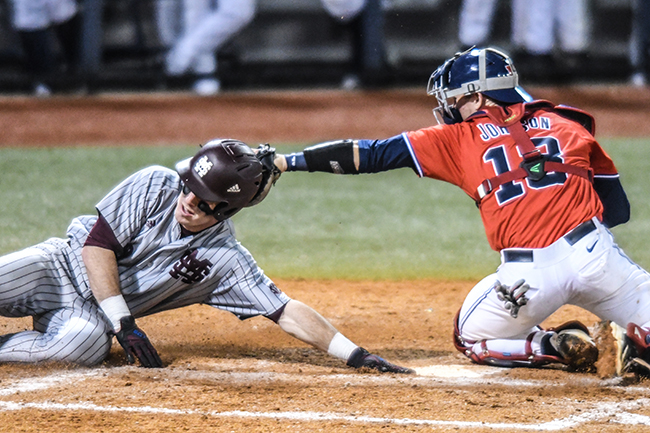 The Rebels took a 3-0 lead into the seventh inning, but Mississippi State completed a rally with some help from Ole Miss to win the series opener, 4-3, at Swayze Field.

The Bulldogs (17-10, 4-3 Southeastern Conference) got to Ole Miss’ bullpen for three two-out runs in the frame, and it stayed tied until the top of the ninth when Dallas Woolfolk appeared to strand runners at the corners with a strikeout of Cole Gordon, but the ball got past catcher Cooper Johnson to the backstop, allowing Jake Mangum to sprint home with the go-ahead run.

“He just missed it,” Ole Miss coach Mike Bianco said when asked if Johnson got crossed up on signals.

An error and two walks, the latter coming intentionally to Tate Blackman, in the bottom half of the frame loaded the bases for Colby Bortles, but Spencer Price fanned Bortles to end it. Bortles went 0-for-5 with four strikeouts, highlighting another anemic night offensively for the Rebels (16-10, 3-4), who had just four hits and were 2 of 16 with runners on.

“We need to put more at-bats together and compete a little bit more in the box,” said Blackman, who was 2-for-3 with two RBIs. “One through nine, that goes for all of us.”

Freshman Will Ethridge (1-2) took the loss in 1 2/3 innings of relief. Riley Self (4-0) notched the win with 2 2/3 scoreless innings out of MSU’s bullpen, which held the Rebels to one hit over the final four innings.

“Thought Self was terrific there at the end, especially against the right-handers,” Bianco said. “But we had plenty of opportunities.”

Two of the Rebels’ hits came in the middle stages to build a lead against MSU ace Konnor Pilkington, who came in with a 2.75 earned run average while holding opponents to a .201 average. Thomas Dillard broke a scoreless tie with a double to the wall in left to score Blackman in the fourth inning.

Pilkington started the fifth by walking Johnson, a .163 hitter coming in, before hitting Will Golsan to put a pair of runners on for Blackman, who plated both with a two-out triple to make it 3-0.

The inning ended the day for Pilkington, who scattered three hits, walked three and struck out five in his second-shortest outing of the season. Meanwhile, James McArthur was sharp in his longest outing of the season for Ole Miss, scattering four hits and fanning five in keeping the Bulldogs scoreless for more than six innings.

But things unraveled when McArthur left with two outs and two on in the seventh.

Will Stokes fell behind the only two batters he pitched to, giving up a two-run double to Brent Rooker on a 3-0 pitch and the tying single to Gordon. Ethridge came on and induced a flyout to keep it tied and pitched a clean eighth before the deciding error came an inning later.

“(Stokes) fell behind to Rooker, who we wanted to pitch tough obviously. He’s one of the best hitters in the conference,” Bianco said. “Credit him. He gets a fastball and rips it. Then they they pinch hit Gordon, he gets to (2-2) and the slider was probably a little up. But it’s hard to say now.”

The teams will play the middle game of the series Friday at 6 p.m. The game will be televised on the SEC Network.