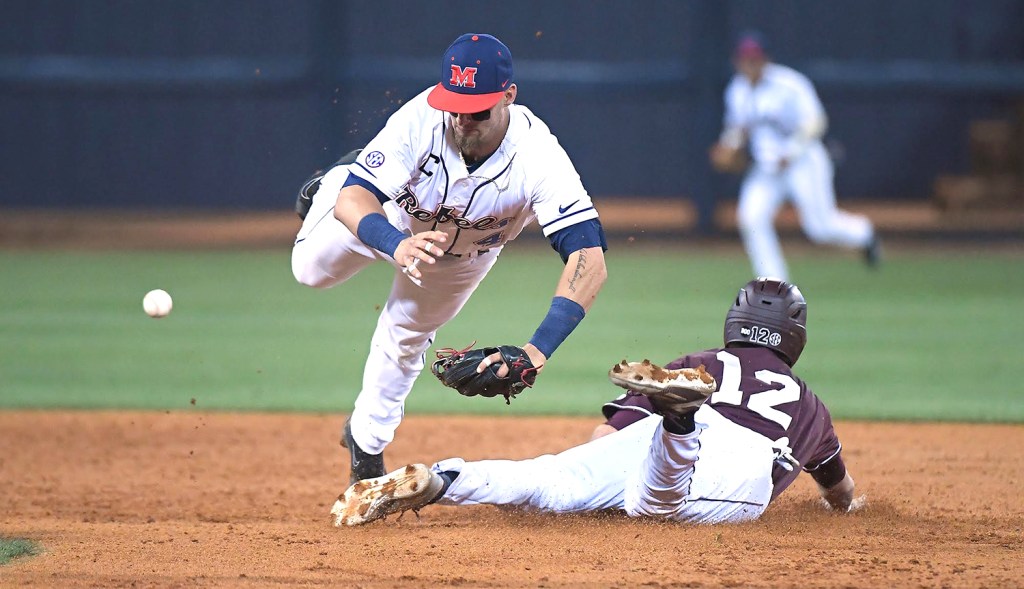 Ole Miss piled up hits Friday, but even with a tweaked lineup, the Rebels rarely delivered the timely ones.

The Rebels had 11 hits but couldn’t do much against Mississippi State’s bullpen for the second straight night as the Bulldogs took the series with a 5-3 win at Swayze Field. The Rebels have scored three runs or fewer in seven of their last 10 games.

Ole Miss (16-11, 3-5 Southeastern Conference) brought the tying run to the plate in its final at-bat, but Spencer Price got Colby Bortles swinging to clinch a series win for Mississippi State (18-10, 5-3) over Ole Miss for the second straight year and send the Rebels to their fifth loss in their last seven games.

“We’ve talked about it for weeks,” Ole Miss coach Mike Bianco said. “It’s not the amount of hits. You can win with seven or eight if you get them at the right time. Certainly we had opportunities.

“We haven’t looked ourselves for a couple weeks. We’ve got to keep going. It’s tough to not play well, and it’s tough to lose. Losing kind of sucks the life out of you. They’re trying and they’re pushing forward.”

Jacob Barton (2-0) got the win after allowing two earned runs on five hits in 3 2/3 innings of relief, but it was Price, Denver McQuary and Cole Gordon who silenced Ole Miss’ bats down the stretch. The trio combined t0 limit the Rebels to one run on four hits over the final five frames out of MSU’s bullpen, which has held Ole Miss to three runs on 10 hits in 12 2/3 innings in the first two games.

Ole Miss catcher Nick Fortes got his second start of the week for Cooper Johnson, whose average dipped to .156 after a hitless night in Thursday’s series opener, while Bryan Seamster made just his fourth start of the season in the outfield. Fortes responded with a career-high three hits and two RBIs, the last plating Tate Blackman to cut the Bulldogs’ lead to 5-3 in the fifth.

“Whenever I get the opportunity, I just try to make the most of it,” Fortes said. “It’s all about having a positive attitude.”

Ryan Olenek went 3-for-4 with two doubles while Grae Kessinger’s second-inning single gave Ole Miss an early 1-0 lead, but the big inning avoided the Rebels from the start. MSU starter Preston Plumlee lasted just one-third of an inning and left with the bases loaded, but Barton got Tim Rowe swinging and Cole Zabowski to ground out to set the tone for another night of too many missed opportunities for the Rebels, who left 10 on base and had just three extra-base hits.

“We blew a big opportunity in the first inning,” Bianco said. “Get picked off, strike out with the bases loaded and then I think we hit a weak ground ball. When you’re not swinging well, you’ve got to get that.”

David Parkinson (4-2) limited the Bulldogs to one run through the first three frames but took the loss after running into trouble in the middle innings. MSU took a 3-2 lead on Cody Brown’s two-run homer in the fourth and extended it on Josh Lovelady’s RBI triple three batters later before MSU ran the Rebels’ junior left-hander with three more hits in the fifth, including a solo homer from Brent Rooker to make it 5-2.

“I think the story tonight was certainly a timely hit and the big home runs by Rooker and Brown,” Bianco said.

Brady Fiegl kept the Rebels close with four scoreless innings of relief, scattering four hits and striking out six. Olenek had Ole Miss’ final extra-base hit with a one-out double in the ninth, but Price got Blackman to pop out before closing it out against Bortles.

“I think we put some good barrels on the ball, and it’s frustrating sometimes when they don’t fall, but we need to be able to overcome that,” Fortes said. “We need to be able to do everything we can to help out our pitching staff because they’ve done a great job.”

Ole Miss will try to avoid the sweep Saturday at 1:30 p.m.