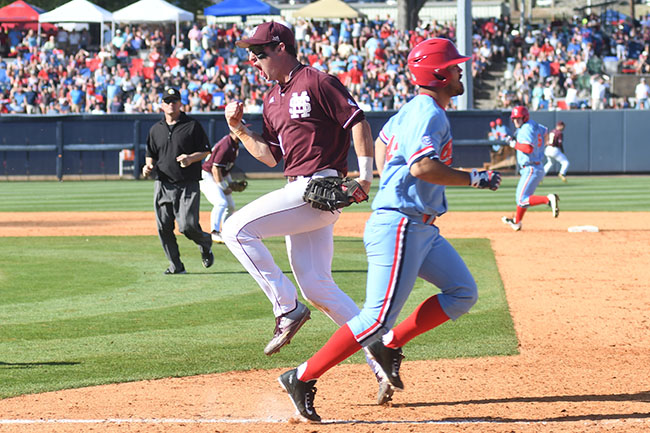 Ole Miss generated some late drama but not much else in its series finale against its in-state rival.

The 19th-ranked Rebels went the final eight innings without scoring in a 2-1 loss Saturday at Swayze Field that gave Mississippi State its first sweep in the series since 2003. Ole Miss has scored three runs or fewer in 15 of its last 20 games and seven of its first nine SEC contests.

“Not using the young excuse, but for a lot of guys, this is the first time (a sweep) has ever happened to them, especially here,” Ole Miss coach Mike Bianco said. “We’ve got to stick together.”

Ole Miss (16-12, 3-6 Southeastern Conference) was more aggressive early in the count but had little to show for it, matching a season-low with four hits with three walks accounting for the Rebels’ only baserunners after the first inning until Tate Blackman’s leadoff single in the ninth.

Colby Bortles singled off Spencer Price before the Bulldogs intentionally walked Thomas Dillard to load the bases for Cole Zabowksi, who popped out for the second out. Designated hitter Tim Rowe followed and roped Price’s 1-2 offering just inside the first-base line, but Brent Rooker laid out to snag it and beat Rowe to the bag to prevent a possible walk-off win for the Rebels, who have lost six of their last eight games.

“Rooker, he made a great play on that,” Rowe said. “I was hoping it would get through, but he did an outstanding job fielding that ball.”

Said Bianco, “I knew he was down the line, but even where he was playing, it was a terrific play by him.”

Ole Miss lost each game against Mississippi State (19-10, 6-3) despite scoring first in all of them. Bortles went 2-for-4 with an RBI single that gave the Rebels a 1-0 lead in the first, but Ole Miss’ bats went largely silent again against Jake Mangum and the Bulldogs’ bullpen.

Mangum (2-2) got the win after limiting the Rebels to the lone run over a season-long five innings. The Bulldogs’ regular center fielder, Mangum had only thrown 8 1/3 innings on the season with a 6.48 earned run average coming into the day but retired 14 of 15 batters at one point, including 10 in a row, before a leadoff walk to Will Golsan in the sixth ended his day.

“He’s not bad. He’s going to run it up there in the low 90s and drop a breaking ball in there,” Bianco said. “I don’t think they thought he’d get to the fifth. He’s obviously not a guy that pitches, but with all their injuries, he’s done a terrific job for them.”

The pitching staff once again kept Ole Miss in it led by freshman Ryan Rolison, who went six innings and limited the Bulldogs to two runs on seven hits while striking out three in his first weekend start to lower his ERA to 2.08. Yet Rolison (3-1) took the tough-luck loss after Josh Lovelady’s sacrifice fly in the fourth put the Bulldogs ahead for good.

Rooker, who went 5 of 13 on the weekend, drew MSU even with an RBI double an inning earlier.

“We’ve used (Rolison) in a lot of different ways and proud of the way he’s handled it and the way he’s performed,” Bianco said. “It’s a different deal when you’re pitching on the weekend, you’re pitching in front of 11,000 people and your team’s already lost two games. You need a good performance out of him, and he delivered.”

Cole Gordon relieved Mangum in the sixth and got some help from MSU’s defense to preserve the lead. Blackman hit a liner toward the left-center gap, but Brant Blaylock laid out to rob Blackman of extra bases for the second out. Bortles barreled one up but right to shortstop Ryan Gidley to end the inning.

Will Ethridge and Dallas Woolfolk held MSU to three hits over the final three frames to give Ole Miss a chance in its final at-bat, but the timely hit once again eluded the Rebels.

“We’re hitting the ball well I believe,” Rowe said. “Just waiting until the baseball gods help us out and find a hole.”