No shortage of storylines heading into Ole Miss’ Pro Day 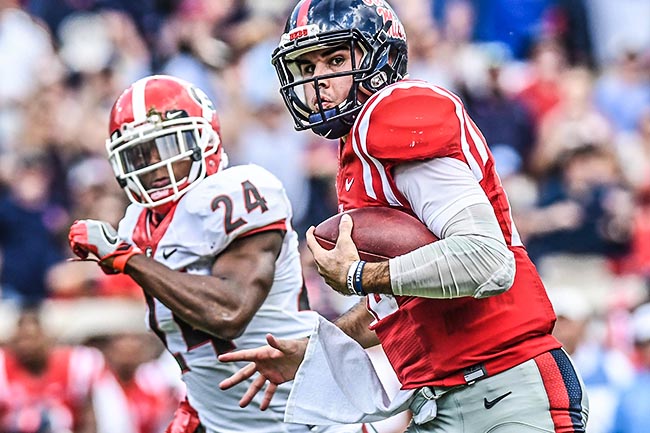 Ole Miss’ Pro Day won’t be like it was last year.

Yet it will be anything but boring.

There might actually be more storylines surrounding the Rebels’ crop of draft hopefuls this year as they grind through a sweaty interview in front of next-level personnel in hopes of impressing them enough to soon be an employee.

Start with Evan Engram, Ole Miss’ outside chance to make it four first-rounders in two years. That’s hard to believe given Engram was an undersized afterthought in that 2013 recruiting class, but Hugh Freeze’s shiniest diamond in the rough who surpassed the likes of Kris Mangum and Wesley Walls as the most productive tight end in school history is shooting up draft boards with a 6-foot-3, 235-pound frame that has the speed to boot, something Engram turned heads with at the scouting combine in February by blazing a 4.42 40-yard dash.

The biggest question with Engram is his in-line blocking given that he wasn’t asked to do it much in Ole Miss’ offense. He held his own in that area at the Senior Bowl, and he’s a mismatch of a pass-catcher with sure hands and high character. His non-prototypical size along with the question of exactly how he fits into an NFL offense makes the first round a longshot — NFLDraftScout.com ranks Engram as the No. 3 tight end in this year’s draft class — but with another strong showing in front of the right team, who knows?

On the other end of the spectrum is Chad Kelly, whose ability to throw lasers from anywhere on the field screams early-round pick. But you know by now talent isn’t the issue with Kelly.

The torn ACL that ended his college career in early November didn’t help and durability is a legit concern with Kelly, who also tore an ACL at Clemson before transferring. It only compounds the trust issues the league already has with him because of his well-documented missteps off the field.

Kelly’s arrest on multiple misdemeanor charges outside a Buffalo, New York bar and restaurant shortly after signing with Ole Miss in December 2014 (which was pleaded down to disorderly conduct) reportedly resulted in his invitation to the combine to be rescinded by the NFL, which has a policy in place preventing draft-eligible players who have been convicted of a felony or misdemeanor involving violence, domestic violence, sexual offense and/or sexual assault from participating in any part of the combine.

So Monday will be the only chance for Kelly to perform in front of multiple NFL teams at once. The same goes for wideout Damore’ea Stringfellow, who was shunned from the combine under the same policy after pleading guilty to fourth-degree assault and third-degree malicious mischief following a Super Bowl incident with a female in February 2014 when he was still a freshman at Washington.

Kelly is ranked the 238th-best prospect for this year’s draft by NFLDraftScout.com while Stringfellow comes in at No. 278. There are only 253 picks in the draft.

Then there’s Tony Conner. Remember him? The fourth five-star signee of that ’13 class who almost certainly would’ve made the jump to the NFL with Tunsil, Treadwell and Nkemdiche last year had he not suffered that knee injury that turned him into a shell of his former self?

Conner started all 12 games last season with a brace on his knee and finished with just 41 tackles, half a sack and no interceptions. He’s spent time in Phoenix training for his one shot to impress NFL teams, and showing improved mobility will be vital for Conner, who at one point was ranked the 20th overall prospect for last year’s draft by ESPN’s Mel Kiper Jr. and was one of the SEC’s best safeties when he was healthy.

In all, 23 former Ole Miss players will audition for a job. Could others, perhaps quick-twitched defensive tackle Issac Gross, two-way player Derrick Jones or rangy corner Tony Bridges, surprise enough to get one?

There will be plenty of eyeballs watching.