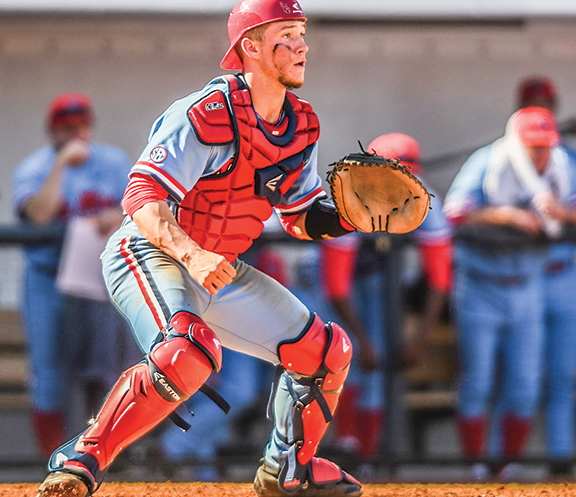 Growing up just north of Chicago, there was poverty, there was death and there was Cooper Johnson.

When offered a way out with a professional baseball contract and a life of fame and riches, Johnson declined and instead ventured to Oxford.

The Mundelein, Illinois, native and Ole Miss baseball starting catcher now possesses one of the SEC’s best young arms behind the plate, is a nightmare matchup for opposing baserunners, and is also a vocal leader for his team and the nation’s No. 1 recruiting class. But as a child, he was more familiar with the adversity encompassing him.

Baseball was Johnson’s first love, but his first companion was his sister, Sophie. She was always a loving friend to Cooper, but as a young girl, she was taken by leukemia. Though she is no longer with him, Sophie remains in Johnson’s heart every time he takes the field.

“I got this tattoo on my wrist of her, and that’s my biggest remembrance of Sophie,” Johnson said. “That’s what I keep with me every day and that tattoo is special to me.”

As Sophie’s medical bills racked up, the family’s money diminished. With his dad’s acting profession as the primary source of money, Johnson became accustomed to growing up in a low-income household.

“I mean my family gets by, we get by,” Johnson said. “By no means will you see us driving around in a brand new Mercedes or anything like that. I’m very thankful for what I have and my parents give me everything that they can and I’ll always love them for that.”

Johnson’s devotion for baseball began as a method to get away from all of his off-the- field issues.

“I can’t even describe how much I love baseball and how much it means to me,” Johnson said. “Obviously people say its just a game, and at the end of the day it is just a game, and I’m not sure how other people feel about baseball, because for me, it’s therapy.”

As baseball became more than just a hobby for Johnson, he was still struggling with problems away from the diamond.

“During middle school and into high school, I gained some weight, wasn’t playing, wasn’t social, playing video games and eating too much,” Johnson said. “I took a big look in the mirror and asked myself, ‘What do you really love?’ The thing that I love to do is play baseball, and so I flipped the switch and started to work hard.”

And work hard he did, because following his freshman year, he immediately became one of the nation’s most sought-after young catchers, and a must-have recruit for programs across the nation.

The summer after his junior year even took him across the globe with the USA National Team. Johnson won a gold medal with his teammates, and he transitioned from becoming a hot recruit to a potential MLB Draft first rounder.

“That summer was the best time of my life. It was a dream,” Johnson said. “I went back to school for my senior year and spent the whole semester meeting with professional teams that basically just come into your house.”

Early on in the recruiting process, Johnson committed to the University of Mississippi, and he credits assistant coach Mike Clement with helping him fall in love with Oxford and Ole Miss. However, his commitment wasn’t solidified, and the prospect of playing major league baseball continued to loom in his mind.

As the draft approached and the hype built for the catcher, Johnson and his draft adviser set his monetary number – the figure that would allow him to bypass Oxford and head straight to the pros – at two million dollars.

“As draft day came around, I told myself I was going to stick to that number, and I wasn’t going to drop it down,” Johnson said. “I knew what I was worth as a player, but scouts had a different idea.”

Johnson fielded offers from multiple MLB teams almost all the way up to his goal of two million dollars, but no team fully met his number, and the No. 1 high school defensive catcher honored his commitment and headed to Ole Miss.

“That’s what led me to come to Ole Miss, which was really a tough decision because I could’ve had a lot of money for me and my family,” Johnson said. “My mom was there for the whole process, and she told me ‘I don’t need for you to go play professional ball, so make the decision based on what you think is right.’”

It’s been Johnson’s dream for as long as he can remember to play professional baseball, and though a contract nearing two million dollars would have given him and his family a relief from, Johnson believes that his time will come, and his years at Ole Miss will only strengthen his cause.

Head coach Mike Bianco believes that with his work ethic, Johnson can continue to improve his game with every practice.

“He’s worked so hard and one of the things that we love about Cooper is how hungry he is to get better, how coachable he is,” Bianco said. “A lot of kids come in that have all the notoriety. For a lot of guys, its hard for their ego to take, but he’s been terrific and he’s embraced trying to get better.”

As Johnson and the Rebels work toward their goal of another lengthy postseason, a potential birth to Omaha continues to be a motivating factor in their young season. A trip to the College World Series, in Johnson’s mind, would compensate for choosing Ole Miss over the MLB.

Wants to be the best

Bianco certainly thinks so as well, and with his latest No. 1 recruiting class, Johnson and the Rebels have the potential to go all the way.

“Without a doubt,” Bianco said. “When you look at this team, with Cooper and the entire class, it has an excellent shot to not only go once but multiple times.”

While Johnson is committed to help deliver the Rebels to Omaha, he is also keen to leave Oxford better than when he arrived.

“I want to be the best catcher that’s ever played,” Johnson said. “I know that with my work ethic and the talent I’ve been blessed with that I’m going to able to make it. I want to come out in three years and show them that they made a big mistake.”

Davis McCool is a senior at Oxford High School. He was recently selected high school journalists of the year by the Mississippi Scholastic Press Association.