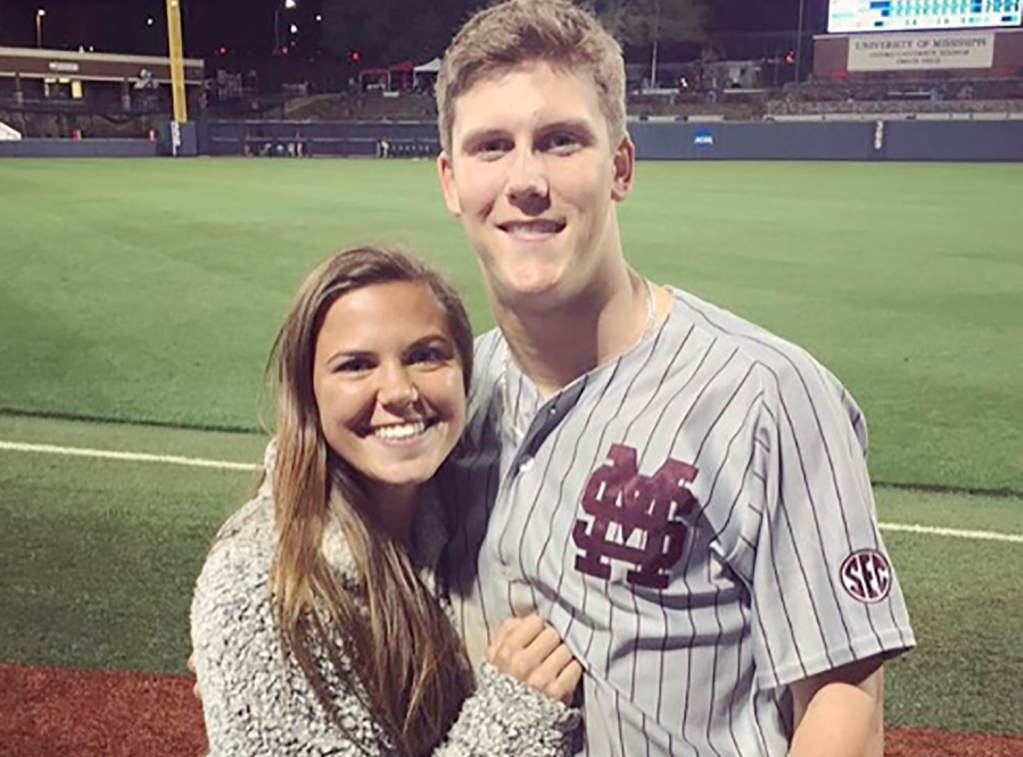 Ole Miss softball player Paige McKinney takes a photo with her boyfriend, Mississippi State outfielder Brant Blaylock, after MSU's 4-3 win over Ole Miss on Thursday in Oxford. The two have been dating for more than four years. (Instagram/paige_mckinney16)

Paige McKinney cried when Brant Blaylock, her high school sweetheart, told her he was committing to Mississippi State.

“I thought for sure he was coming to Ole Miss. I already had all these plans and it didn’t work out that way,” McKinney says. “It took me about a week and then I slowly started realizing, ‘OK, God’s got a plan. There’s a reason he’s going there and I’m staying here.’”

McKinney, a junior shortstop for Ole Miss’ softball team, and Blaylock, a redshirt freshman outfielder for Mississippi State, have been dating for more than four years. They’re committed to being an odd couple amid Mississippi’s most heated rivalry.

“We’re pretty serious,” McKinney says. “I’ll leave it at that.”

Juggling classes, practices and games nearly 100 miles apart often makes it hard for the two to see each other face-to-face. This past weekend helped with Mississippi State’s baseball team in Oxford for its annual series against Ole Miss while the Rebels’ softball team was also in town playing Kentucky, giving McKinney and Blaylock a chance to spend some extended time together.

But it’s usually one of them making the near two-hour commute every couple of weeks — or whenever they can find the time — for a brief visit. That means using an off day or getting out practice early enough to make the drive only to have to drive back the same night for classes the next morning.

“It’s never more than a two-hour visit, but any time is better than no time,” McKinney says.

Their everyday routine involves some texts, FaceTiming between classes and a phone call before practice if time permits. McKinney guesses the two talk 20 minutes a day in all, including a longer phone conversation most nights to wind down.

“Luckily we kind of live the same grind, so we know what both of each other are going through,” McKinney says. “It helps to have somebody to talk to that knows what I’m talking about.”

McKinney is fiercely passionate about Ole Miss, her father’s alma mater, and the same goes for Blaylock’s pride in Mississippi State. McKinney will pull for Mississippi State when Blaylock is playing while he’ll cheer for the Rebels when McKinney’s on the field, but that’s as far as the support for the other schools goes.

“His mom will make sure to point out that this is the only Rebel we like, and I think it’s taken my parents a little while to say something about Bulldogs because I even have a hard time saying it,” McKinney says. “I can’t say the Hail State thing. That’s unruly of an Ole Miss Rebel to say that. I’ll say, ‘Go Brant,’ and that’s all.”

Being together while watching Ole Miss and Mississippi State play each other in other sports isn’t the most comfortable thing for either of them, but they can tolerate it. “It never gets to the point where I want to fight him or anything,” McKinney says.

But Egg Bowls, McKinney admits, are the worst.

The two have sat together for all three of them since McKinney’s been in college. That includes last season when Blaylock, sporting a maroon Mississippi State shirt, watched the Bulldogs’ 55-20 demolition of Ole Miss from the student section at Vaught-Hemingway Stadium.

“It is so hard to sit next to him in Vaught-Hemingway Stadium and watch us play Mississippi State. It drives me nuts,” McKinney says. “I don’t hear the end of it. I’m never right and he’s never right. That’s the only thing we ever argue about. … The thing is he’s got bragging rights for the next year when we play them, and that’s the worst part about it.”

After thinking for a few seconds, McKinney says that’s as heated as she can remember things getting between them. Then she pauses again.

“Sometimes I just want to knock him out,” she adds with a laugh.

Once they’re done ribbing each other, perspective kicks in. McKinney says Blaylock could very well be the one, and it’s going to take a lot more than a good old-fashioned rivalry to come between these two.

Truth be told, their relationship isn’t all that odd.

The two grew up together in Southaven and went to the same elementary, middle and high schools. Their families live in the same neighborhood.

The way McKinney tells it, Blaylock had a crush on her in the seventh grade but she “didn’t quite like him back.” But he grew on her, and the two began dating when McKinney was a junior at Desoto Central High and Blaylock was a sophomore.

It was the same year McKinney committed to Ole Miss, which came in with a late scholarship offer to save the couple from a situation where those occasional commutes would’ve been virtually impossible. Had Ole Miss not entered the picture, McKinney would be at Arkansas.

“That was my biggest recruiter,” McKinney says. “We laugh about it now because we’re like, ‘I don’t know what we would’ve done.’ It would’ve been a six-hour distance between the two.”

Her emotions were quite the opposite when Blaylock told her he wouldn’t be joining her in Oxford. Blaylock was recruited by Ole Miss and Mississippi State, but the Bulldogs offered first with a “better scholarship,” McKinney says.

McKinney jokes that she should’ve tried to be a little more persuasive, but she kept a level head about it once the initial disappointment wore off. She says she ultimately didn’t want Blaylock choosing a school based on her.

“Who knew where we were going to end up?” she says.

But here they are, continuing to pull for each other when one’s team is playing the rival school and putting up with each other when they’re not. McKinney says it’s Blaylock’s idea for the two to become Memphis fans once their playing days are over to better handle that because neither is letting any Ole Miss or Mississippi State décor into their future home if it gets to that point.

“Both our families kind of grew up Memphis fans anyway, so I don’t know how opposed I am to that,” she says. “It’d be all right I guess.”

For now, they’re about as content as a couple in their situation can be.

Quality win for the dawgs against a quality opponent! I tried to be neutral, but that didn't work out?