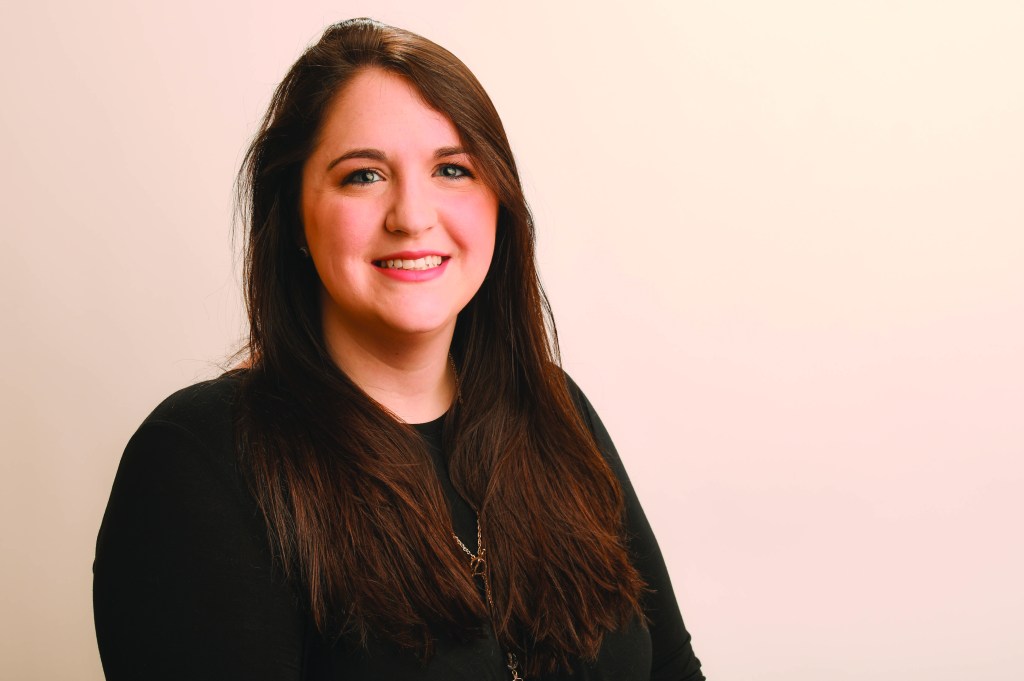 Talking to Dr. Kaitlyn Mize is like talking to a favorite friend or neighbor, even if you’ve just met her.

In Oxford just since August as a new OB-GYN with Oxford Obstetrics and Gynecology Associates (the practice of Dr. Glenn Hunt, Dr. Greg Patton, Dr. Julie Harper and now Dr. Mize), she has Lafayette County roots that run deep and a warm personality flavored with humor that makes her more than approachable.

She’s one of only two female OB-GYN physicians in Oxford (Dr. Harper is the other) and at the age of 30, she’s the youngest. Dr. Mize, married to college sweetheart John Burnett, thrives on helping women and especially enjoys working with teenagers and college-aged patients, understanding that her approachable nature helps her win the trust of patients.

It comes from being a doting older sister and from playing on girl’s sports teams in high school and being in a close-knit sorority, she says.

“I have always been around girls and women, until I married into boys,” she says, smiling. “I played girls sports and I was always surrounded by strong female figures, so I know how to communicate with girls, how to tap into what they actually need.”

Dr. Mize says her younger sister was just 14 when their mother died and, “I had conversations I didn’t know how to have at the age of 20 and 21 so you learn from experience.”

That’s why her husband wasn’t surprised once she proclaimed she wanted to focus on OB-GYN as a physician, while a student at the University Medical Center in Jackson.

“I had waited four years to declare and said I wasn’t sure,” Dr. Mize says. “I finally did OB-GYN rotations and said I’m going to do OB and John was like, duh, we were all just waiting on you to figure that out.”

She’s found the calling meets a need, particularly in this community and region. She sees patients from the Oxford area and Ole Miss but also from the surrounding area, including Batesville, Calhoun City, and Grenada, and says demand and appreciation is exceeding what she imagined.

“The biggest surprise has been that we have a good bit of high risk here that you don’t anticipate seeing in private practice because our pull is from the entire area and a lot of people who really need help around,” Dr. Mize says.

“And then I am literally there the day you are having a baby and that’s amazing. Just amazing.”

Dr. Mize is more than a little familiar with Lafayette County since she lived in Tula while in high school and her family home was in Paris when she was in college. She also played high school basketball, softball and golf at South Pontotoc High School and says she knows most every country road in the area.

“I know roads most people have no idea about,” she says, laughing. “You learn a lot when you live in Tula.”

Her pediatrician when she lived in Tula was Oxford’s Dr. Joe Harris, someone she calls an important inspiration for her entering the medical field.

“I just wanted to be him,” Dr. Mize says. “I idolized him. And now I get to deliver babies and he’s on call as the pediatrician at the hospital. It is amazing how that works out and I think it is so cool that he was my doctor and now we work together.”

Dr. Mize and her husband met while students at Delta State. He played football and she was involved in many activities including sorority president.

He went to veterinary school at Mississippi State and she went to medical school. They got married in July 2016, the month before she began practicing in Oxford. He’s a practicing vet in New Albany.

“We love being here,” she says. “We’re big sports fans and get to as many games as possible. We go to volleyball matches, women’s basketball, we love it all.”

Mostly, though, Dr. Mize is enjoying being home in Lafayette County and filling a need in the community as a much-needed female OB-GYN.

“I work with the best people and in a place that needs me,” she says. “I can’t ask for more than that.”

Worth Knowing: Dr. Mize thought about playing golf in college but opted for Delta State because she got a full scholarship into the Honors College.

Favorite thing about our community: “I really like young people and helping them and this is a good place for that. We also love sports and there’s always something going on. My husband counted the days down to the start of Ole Miss baseball season.”