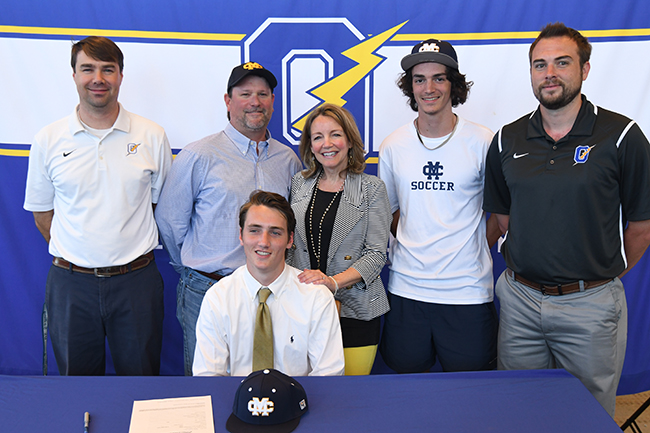 Cole Calhoon knew he had a decision to make, he was just not sure who to choose or when he would do so. That was in February and in the first week of April, Calhoon made his choice to continue playing soccer at Mississippi College.

It was between the Choctaws in Clinton or going to Belmont in Nashville. While most would choose to spend four years in Nashville over being near Mississippi’s capital city, Calhoon had his reasons.

“I took forever to decide,” Calhoon said. “It was just too hard, they’re both great schools, great coaches, great teams. Mississippi College just had a little bit of a better offer, more money. It’s a little bit closer to home. After a long time I just decided. …I liked the feel a little bit more.”

Mississippi College started in on Calhoon midway through his senior season and Choctaw head coach Kevin Jones got his first look at Calhoon during the MHSAA Class 5A state championship game at Madison Central on Feb. 4. Afterwards Jones invited Calhoon to come take a visit and workout for him, which was quickly followed by a scholarship offer.

Belmont was in on Calhoon last year after he attended an ID camp and was part of a select few campers the Bruins focused and eventually made him an offer.

Calhoon’s decision caps off a senior years that including the Chargers making it back to the state championship game and winning their first title since 2013 all while doing it with a brand new coach in Charles Sabatier, who returned to lead his alma mater to another ‘Gold Ball’ trophy.

“It was nerve-wracking, the whole years, just having not committed anywhere,” Calhoon said. “Having to play and then email, talking to coaches. Going back and forth, trying to decide where you’re playing then going to practice. There was a lot on the plate, but I’m glad it happened and I’m glad we won state.”

As a midfielder, Calhoon scored three goals this year and assisted with another. The Choctaws have three senior center midfielders on their roster heading into next season, which means Calhoon may see time on the field as a freshman, just in another position. He views it as an opportunity to make a splash and become the starting midfielder come his sophomore season.

“(Mississippi College) is getting a fundamentally sound player,” Sabatier said of Calhoon. “He is the type of player that leads by example. …They’re getting a solid, outstanding athlete and a great guy. I’m excited for him.”